BASSETERRE, ST.KITTS (Thursday 11th November 2021) – While the Royal St. Christopher and Nevis Police Force (RSCNPF) is currently investigating a “serious threats” incident  at a local high school, warning has been given about rumours that can create additional alarm.

A statement from the police issued on Thursday 11th November 2021 spoke about a meeting held with parents and students concerning an incident at the Charlestown Secondary School said not to have involved any firearms thus correcting rumours and unofficial media reports which claimed otherwise.

“…the Police have met with the management of and guidance counsellor at the Charlestown Secondary School, in addition to officials from the Social Services Department and Child Protection and Probation Services following a report of serious threats made among several students during an altercation on October 27, 2021,” it read in part.

It was further stated that as a follow up, another meeting was held that brought the students involved in the incident together to discuss the matter.

“They were accompanied by their parents and most parties were present. Investigations into the matter are ongoing. The Royal St. Christopher and Nevis Police Force would like to make it clear that investigations so far indicate that none of the students had a firearm nor was a firearm found on the school’s premises. We would also like to warn the public against peddling rumours that might create additional alarm and cause further distress among affected parents, students and the community. The RSCNPF is also encouraging media entities to act responsibly by verifying these types of reports before publishing news items. Failure to do so could exacerbate an already unfortunate situation.”

The police have outlined how any reports of violence at any school are dealt with.

“The Royal St. Christopher and Nevis Police Force (RSCNPF) strongly believes that schools should be violence-free spaces for our Federation’s young people. The Police Force has a well-established relationship with school administrations – for both public and private schools – to ensure these institutions continue to be safe and to assist with guiding students.”

The statement continued: “We do so in several ways, for example, through the National Intervention Team and our School Liaison Officers. Any reports of violence at any school in the Federation is dealt with through our Special Victims Unit which handles all matters involving juveniles, in coordination with several other agencies. Incidents involving children can be very delicate and sometimes complicated, but must always be handled with a certain level of care and privacy.” 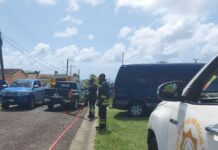