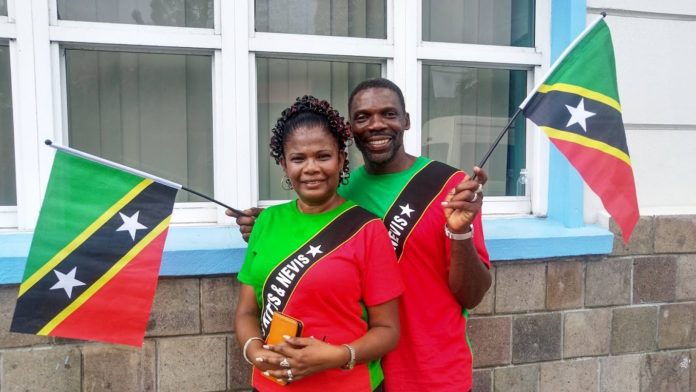 BASSETERRE, St.Kitts (Wednesday 25th September 2019)-On the occasion of the 36th Independence celebration for St.Kitts and Nevis, this media house-for yet another year- took to the streets during the annual parade (Thursday 19 September) to interact with citizens, residents and visitors to get their take on the annual celebration and the patriotic/festive feeling in general.

Here are the responses:

So we’re here from the United States. We’ve been here for (almost) a week and we heard that today is Independence Day and so we wanted to come see the parade and to celebrate it along with the local people and just see what the culture is like more on the Independence Day and it’s very impressive how patriotic everyone is; everyone seems to have the local shirts with the flag on the shirts and it just seems like a very nice day and everyone was very polite.

Today’s Independence Day parade was indeed a specular one. It was colourful, it was lively and the turnout was excellent both the persons who came to look at the parade and the persons who were actually on parade. I was especially amazed by the Explorer’s [Youth Club] and all their different colours. They marched well and it seems as if they had a good time. Independence 36 parade was truly indeed a remarkable experience.

Glenroy Bartley with his wife Joyce (from Jamaica and Guyana)

Independence in St.Kitts and Nevis means a lot to me as one of the smallest country in the world to celebrate Independence in such a big way. I like the colours and the fact that everybody is dressed up with the flag and get together and have fun; I really like it, and so I come out this morning to support Independence Day in a big way just as everybody.

It’s good. I enjoyed the marching and so on. I always look forward to coming into town to watch the parade. I like the colours of our national flag; I like attractive colours that why I decided to show the colours using bows for Independence celebration.

I enjoyed the parade today as I have enjoyed it since I was a child so whether it was the Queen’s birthday or whatever, parades have always meant as much to me. I was born by the police station and so I’ve always enjoyed the Independence Day parade and all other parades.

Independence means to me that this country is celebrating its birthday and it’s a good thing for us from slavery [and colonialism].

It’s our history and we’re celebrating 36 years and we’re enjoying it for an Independence Day celebration and I hope with the next Independence, Dr. Denzil Douglas will be the next Prime Minister.

We are very restricted to a lot of stuff; you have be careful of what you say so it’s good to say that we’re independent but from 2015 to 2019, are we fully independent as a nation and as a people based on the situation that is happening in our country today? People are not fully free to express themselves; I’m an example of the whole situation, we’re not fully free to express because a lot of fear is in people’s hearts, a lot of fear is in people to express themselves; you are not free to do what you want respectfully and that to me does not signify the full meaning of Independence.