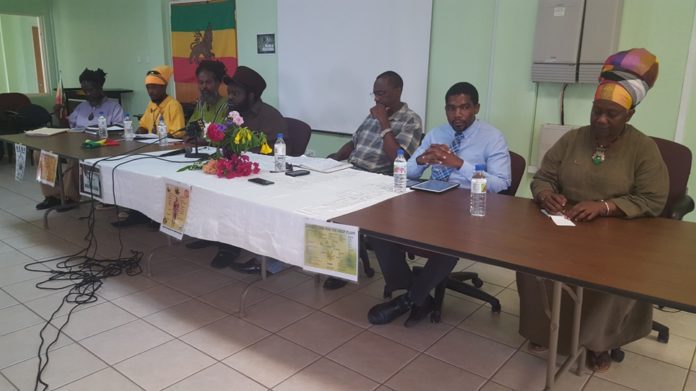 Internal Medicine Specialist Dr. Terrance Drew and Former Permanent Secretary in the Ministry of Agriculture on the sister isle Nevis Dr. Kelvin Daly (second and third from right respectively) were among the presenters at the press conference organised by The Organisation of Rastafari in Unity on the topic of marijuana. (Spokesman Snap)

BASSETERRE, St.Kitts– The Organisation of Rastafari in Unity, during a press conference held on Monday 22nd August at NEMA Headquarters in Basseterre, put forward a view that St.Kitts-Nevis as a Christian society is being hypocritical in outlawing marijuana, a plant created by the Almighty.

That point of reasoning was expressed by Ras Sankofa who also criticised how the judiciary system handles individuals labelled offenders of the Drug Act using heavy fines and imprisonment.

“If the Almighty gives us something for our use and we use it, how are we committing an offense?” was one of the questions he posed.

In his remarks, Ras Sankofa shared that he too had been dealt a punishment in the past having been jailed for such an offense.

Another observation he made is that: “The government should not have the authority or the right to fight against a plant that the Almighty created.”

As many people are aware, marijuana is widely used by Rastas as a sacrament for holy purposes.

Ras Sankofa pointed out that historically “Marijuana was one of the number one used plants from creation. Like every other plant, it was given to us by the Most High for our use.”

He cited the Biblical content from Genesis 1:29 which speaks to ‘Behold, I have given you every plant yielding seed that is on the face of all the earth, and every tree with seed in its fruit. You shall have them for food.’

He then went on to say: “Marijuana is therefore a gift from the creator and as a Christian nation of people who believe in the Almighty and His creation, it seems quite hypocritical to single out one plant out of billions of species and families of plants, flowers and trees and make it a crime to society.”

Ras Sankofa added: “But when I read the Drug Act, it’s not just that one plant; it is also the coca leaf and poppy plant is illegal here in St.Kitts (and Nevis) and most parts of the world. So I would say three plants out of billions of species of plants.”

He separated marijuana from being classified as a drug among those two other plants by talking about its use in its natural state.

“Anything the Almighty create, it is natural. From man change it into another form then it becomes either a drug or something unnatural; something that you can say man made. Marijuana, we use it in its natural state, the way Father give us so we give thanks.”

Ras Sankofa also remarked: “If the Almighty gives us something for our use and we use it, how are we committing an offense? That’s the question we must ask ourselves. Are we higher than the Creator? If the Creator gives you something and he tells you to use this for your benefit why would man in their immoral state of mind will choose to make that plant illegal? …It is a wrong thing.”

He also stated: “We are faced now with a situation…are we gonna follow the law of man or are we gonna follow the law of creator? So this is the basic question we are faced with in our daily lives and we being spiritual people living in the western world, we cannot betray the love and the blessing that the Creator has given to (us) to be able to give us such plant. So that is our basic foundation is that marijuana is a plant, it comes from a seed created by the Most High and it is immoral to outlaw anything that the Almighty create in its natural state.”

In touching on the social aspect of the controversial topic, he highlighted “A person should not be criminalised risk losing family for jail time.”

He also talked about the lump sum monetary penalties.

“When a man is found guilty of (having) marijuana, according to the law, the Drug Act, the magistrate has the right under summary conviction to charge him up to $100,000 and for indictment which is like a high court matter, up to 200,000.”

He mentioned that a young man from his community is currently facing a similar situation in that regard.

“Right now I have a youngster in my village of Dieppe Bay who has to pay $20,000 in one month or six months in prison. He never committed a crime ever before in his life and the youth is under (the age of) 25 and there is hundreds of youth who’ve been through that!”

Today (Friday), the Rasta organisation group is scheduled to hold its annual march through the streets of Basseterre, starting at 4PM from the Greenlands area and climaxing at the Independence Square with a rally.