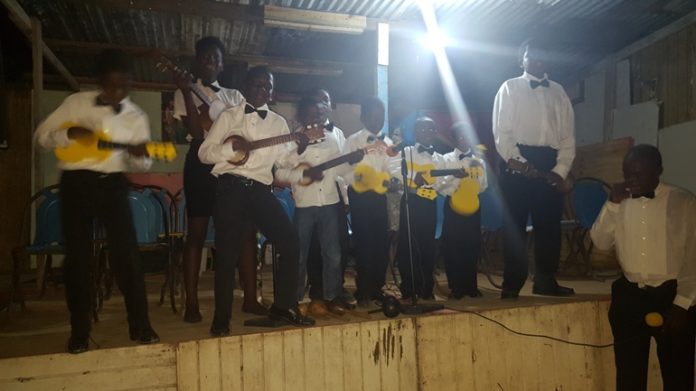 Parents, guardians and other well-wishers on Saturday 26th August witnessed lively renditions performed by the children.

The yearly summer workshop, which began on Monday 31st July and concluded on Friday 25th August, saw some twenty (20) participants this time around.
As usual, students were taught how to play the banjo, quarto, guitar as well as the fife.
Speaking to reporters, Nisbett hailed this year’s seminar a success.
“The workshop was a success because it brought of some of the best out of some of the younger students. They were like professionals. They came they sat and (learnt). With the theme being ‘Discipline Is The Key’ that was the most prominent thing in the workshop because as they stepped out of line, they were corrected. Some of them didn’t like it but they appreciated what we did for them.”
According to him, the workshop was “Innovative and creative because they learnt the chords which was important and they adapted themselves quickly to the playing of the instruments.”
Nisbett was in high praise of music specialist, Robert ‘Bobby’ Martin- who has over 50 years of experience- for “getting the students motivated to learn to play.”
As understood, during the workshop, the students had gigs at business places Valu Mart and Best Buy.
Nisbett thanked all who were instrumental in helping to make the workshop a success including Delisle Walwyn and Company Ltd, Development Bank and RAMS supermarket as well as the parents and guardians and members of the media including videographer and technician Mervin Sage.