BASSETERRE, St.Kitts (Friday 4th December 2020)- Minister of Health Akilah Byron-Nisbett has revealed information which indicates a high number of young people under the age of 30 as well as more males than females being infected with the sexually transmitted virus HIV in new cases for St.Kitts-Nevis.

That information was revealed in her address to the nation in observance of World AIDS Day 2020 under the theme ‘Ending the HIV/AIDS Epidemic: Resilience and Impact’, delivered on Tuesday 1st December 2020.

The Health Minister said this year’s theme is timely, for although, worldwide, there has been significant progress in the management and containment of HIV/AIDS, the condition remains a major public health issue.

According to her: “The theme reminds us that individuals, families, organizations and countries must come together in solidarity to mitigate against the Human Immuno-deficiency Virus (HIV) and the Acquired ImmunoDeficiency Syndrome (AIDS). With this in mind, many countries have also adopted the sub-theme “Global solidarity, shared responsibility.”

She added: “Globally, since the beginning of the epidemic in the early 1980” s, 76 million people have been infected with the HIV virus and approximately 33 million people have died from it.
At the end of 2019, 38.0 million people were living with HIV, with an estimated 0.7% of adults aged 15–49 years worldwide being affected.”

Byron-Nisbett said while the estimated annual number of new HIV infections in 2018 was 37% lower than in 2000, the population demographics in many countries, reveal that growing numbers of adolescents and young people mature to ages where HIV risk is greatest.

The Health Minister also expressed that the Federation of St Kitts and Nevis joins the rest of the global community to engage in this significant observance, every year to: Bring attention to the HIV/AIDS epidemic, Endeavour to increase HIV/AIDS awareness and knowledge, Speak out against HIV/AIDS stigma and discrimination and Make the clarion call for an increased response against the disease.

According to her the Ministry will continue to promote and support initiatives aimed at reducing barriers to access sexual and reproductive health services and strengthening surveillance and monitoring and evaluation data, to better monitor the response in the Federation.

She used the opportunity to salute all of healthcare workers “who continuously educate the public about HIV and AIDS and are engaged in our Health Promotion Awareness Campaigns, even amidst the dreaded and unprecedented COVID-19 as we endeavour to fully arrest this public health threat by 2030.” 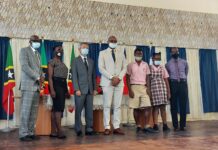 Taiwan Ambassador To Scholarship Recipients: Your Education Is Your Wealth

Taiwan Ambassador To Scholarship Recipients: Your Education Is Your Wealth

In the Spirit of Christmas 2020