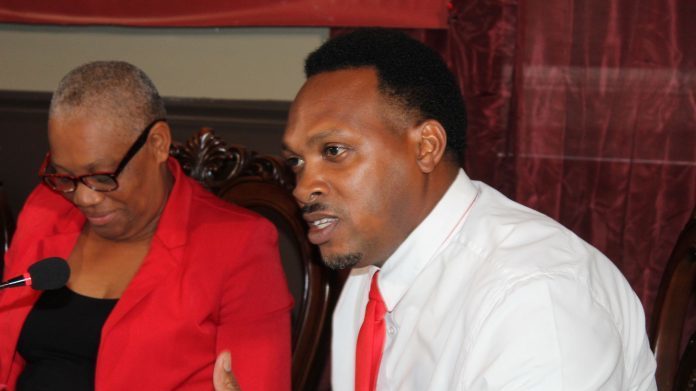 “At some point over the past four years, Harris has recognised that he is very unpopular poll after poll, and I understand that they are doing a next poll. All of the polls are saying that the majority of the people this country think that he is leading the country in the wrong direction so Harris, instead of calling the elections-and I think you should call the elections Harris-… he decided to visit a piece of legislation called the National Assembly Elections Act that establishes the rules for who and when people can register to vote in this country.”

He made the disclosure this week’s on the party –sponsored ‘Issues programme aired on FreedomFM while on the topic of government’s recent withdrawing of the National Assembly Election (Amendment) Bill 2019 from the order paper during parliament.

“He knows that elections are mainly about numbers and he determined that he will do whatever it takes to manipulate of voter registration process to deny as much Labour people or as much people who intend to vote for Labour and support Labour so that they can have a numerical advantage coming into the election,” he added.

Natta-Nelson pointed out that SKNLP Deputy Leader Marcella Liburd has been consistently talking about the illegalities taking place at the electoral office to disenfranchise the people of St.Kitts and Nevis.

“We continue to raise the issues because they are unresolved issues and because they have potential of undermining the legitimacy of an elections and thus result in a next government.”

He listed the removal of newly registered voters, still no report on the objection process of February 2019 and the continued removal of names of persons from several constituencies in particular constituency Two and Four as being present issues.

Further regarding the proposed amendment bill, Natta-Nelson said “Harris seems to have wanted this act to prevent nationals from coming home to vote.”

“Harris seemed to have think that passing this legislation that the overseas voters which in majority of supporting the S.Kitts-Nevis Labour Party, Harris thought that with this legislation being passed would have not allowed them to come home to vote. The joke about this-the entire situation- is that they had to admit that they cannot win an election without the overseas voters; they were allowed to vote the last time but for some reason Harris thought that if he could manipulate the system, it would have allowed them not to come home to vote,” he also said about his political opponent.

He outlined three areas highlighting what changes to the bill would have meant.

He continued: “It would have completely barred Commonwealth citizens from voting. This means our Jamaicans, Indians Guyanese, Antiguans; immigrants from communities who would have lived here and worked for a whole year paying taxes, contributing to the economy of St.Kitts and Nevis would have been unable to vote if [Harris)] would have gotten this bill passed.”

Natta-Nelson, on the third point, stated that such “would have also ignited the enumeration process of how to go about selecting who would be the new voters in S.Kitts and Nevis.”

“But how would we have trusted a new process under the Team Unity coalition government when you look at all the corruption and discrimination taking place in other government programmes…the roof repair programme, the poverty alleviation programme and when you look at what is taking place in the electoral office? How would the people of St.Kitts and Nevis be guaranteed if an enumeration process was taking place without corruption and discrimination intended by Harris to give him an unfair advantage in the next upcoming elections,” he questioned.