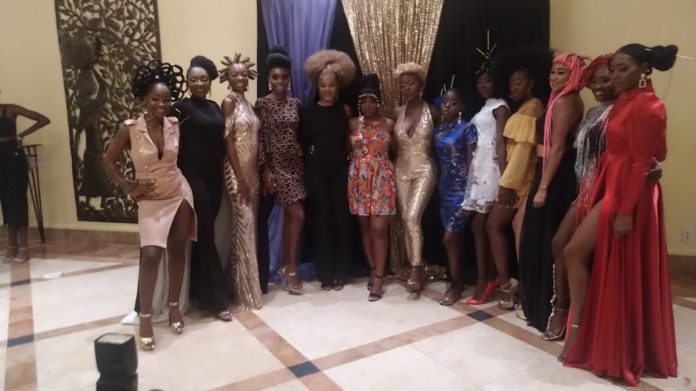 BASSETERRE, St.Kitts (Friday 26th July 2019) – 25-year- old Jalicia ‘Ja’ Benjamin of Jalicia’s Hairstyles, a well-known local braider branded with the hair industry term ‘plaitologist’, who has over the years become synonymous with getting international social media spotlight and overseas bookings for her skills and techniques, has now gained more adoration having successfully hosted her first annual hair and fashion earlier this week.

Dubbed ‘Cultural Flavour Hair & Fashion Show, on Sunday 21st July scores of supporters, clients and other well-wishers assembled at the St.Kitts Marriott Hotel for a night of fashion and fun.

Braided afros, funky Afrocentric artsy looks, bangs and colour-splashed braided depicting the St.Kitts-Nevis national flag as well as that of Trinidad were among the up, down and side dos which captured the collective themes-African, Caribbean and the Orient while the models rocked pieces from Kiwie Dan Couture and Twinkle Boutique and finished with outfits they personally chosen to rock.

Speaking with Benjamin following the event, when asked for her impression on the support she received, she commented “Oh, it was more than what I expected.”

“I’ve always liked fashion shows and modelling shows and being a braider I felt I needed contribute braiding into the industry that’s how I came up with the idea about a fashion and braiding show,” she remarked when asked about the inspiration to put on a show of that nature.

At least 14 models strutted their stuff rocking Jalicia’s hair dos, and as shared by her, “I did all in five days. It was tiring. Yeah, I didn’t sleep last night but I know it was going to be worth it.”

As understood, she has been inspired by her mom Malicia Benjamin who has been in the business for almost 30 years having started at the age of 15 picking up the skill in her home community of Trafalgar village.

As a young girl, “what really caught my attention first was just to see her (my mom) doing hair for so many hours to the culmination and that just pushed me to elevate not just hair but anything at all…”

Her mom expressed: “I’m very very proud because that’s my fruit and I feel good that she’s carrying on…As a teenager she grew a love for it and I’m really proud because things I didn’t get to do, she’s doing and that makes me feel really good…”

This media house spoke with a few of the attendees and here is what they had to say:

“It was awesome. It was spectacular. The cast was amazing; she couldn’t have chosen a better group of girls. It was just awesome! Everything was excellent. I am so looking forward to next year.”

“I think first of all the audience was extremely appreciative of what came before them, they were very enthused ad you could tell there was excitement coming from within them because they really wanted to see what sort of hairstyles would be on show this evening…they all were very into the show. You can tell… people were applauding, people were cheering and there were actually some people you could hear ‘oohs’ and ‘aahs’ when certain hairstyles came out. All of the hairstyles were extremely exquisite and you really have to commend the plaitologist herself Jalicia for what she has put together. She wanted to have a cultural flare to this event so she had to have St.Kitts-Nevis. We saw the model with the colours of our flag in braid and Trinidad also. She wanted to do other Caribbean islands…. she had the orient and she had of course Africa and according to her eighty per cent of the styles she has never done before so we saw some unique end products coming from her.”

“It’s amazing to see that she has followed in the footsteps of her mom and look at her now-She’s the master of it all! She is really good and the show was really good; she has to do a follow-up because she definitely can’t do just one and let it go; it was really good.”

Entertainment was provided by Dejour and DJ Flames while Umona Allen and Kimarah Isaac were the hosts.