BASSETERRE, St.Kitts (Thursday 13th July 2021)- The in-person order by police officers instructing food truck vendors in Basseterre to cease and desist operations has created a recipe for disaster for business owners-particularly those around Independence Square- who say they were not properly informed by government via a letter to do so.
On Thursday 15th July 2021, this reporter spoke with two business owners who are licensed to work on the street in that area, namely Sheldon of Lifespan Organic Vegan Food and David Heyliger of Samantha’s Diner who said they were not aware of any new measure made about their line of work.

Both opened up about being told on the spot the day before (Wednesday) by police who gave no specifics about the reasoning for such an order. The two separate businesses are run by husband and wife management.
Sheldon, who has been in that area since 2015, stated: “I was there doing my business as normal yesterday, a lady came to me said she want to have a word with me… said she was an officer. She didn’t introduce herself to me in the first place. She said ‘Do you know that you have to close this business; you cannot operate here anymore’. I said ‘No’ [and] she said ‘You don’t listen your radio?’ I said ‘No’ and she said ‘You should listen your radio’ so I said to her “I don’t understand ya nuh…when I was getting my licence, I didn’t go to the radio, I go to the government so [if] the government has an issue with me here, you all should put it on paper or you call my number or you call a meeting and we discuss it; somebody from the government should come. So she kinda get upset with me. I don’t know if anything in that should get anyone upset…”

Sheldon said the female officer then called for backup and three other officers came.
“and I was explaining myself and they didn’t want to hear me. They didn’t want to hear nothing that I had to say about my next source of income after you close off this business, where is my next location  or where I could get a job or what is the purpose of what ya’ll are doing…no answers.”

According to him, the response he received was ‘You have to move. It’s a state of emergency.’
A cell phone recorded video capturing a piece of the interaction was widely circulated on social media and has been publicly debated.

Sheldon talked about takeout options that have been made available for food places.
“I know that they said if you’re doing a takeout it is ok, and I offer that kind of service even before they came in with this corona ‘plandemic’ thing so all I see there is just greed and power; no love in it.”
He said a different location has been suggested which he plans to explore.

“Well they appoint me to a location, am gonna check it out and see how I could set it up and work with it but at the same time they will have to change my business licence address because I have a license…that is what I use to operate here; it says Independence South Square Street, Basseterre. I’m not illegally doing my business.”
Before moving to the Independence Square area, the business operated from the Bay Road since 2012.
In speaking about the situation, he said “Basically what is happening right now I don’t think we can do anything about what is happening because let me show you something…a lot of people say they have love but they don’t know anything about love .This is about power and control, and when you put a man in power and control, he can do whatever he wants to do and this is what is happening right now.”

He added: “My take on the whole thing, it’s love still. I and I no inna no war with anyone because if I was inna war, I and I wouldn’t be here …My mediation  [is] different. I deal with love, trust, respect and loyalty. If you want me to move, put it on paper and you give me a notice, and so I know within a certain time, I will have to move; don’t come do the bully [vibes] and dem ting dey…”

Samantha’s Diner has been in the area at West Square Street in the vicinity of National Bank for about three years but the business itself has been in existence for about five years having operated from their Buckley’s village home prior to such.

Heyliger had a placard which read:  I DON’T BELIEVE THIS “CARING” LOVING GOVERNMEN[T] IN ST.KITTS & NEVIS IS WILLING TO ARREST ME FOR TRYING TO EARN AN “HONEST” LIVING

When asked why he chose protest action, he replied: “Because of the injustice of the move by the government because even though it’s the police officers, they are under instructions. How dare you come to small business [in this way].. we are not gang bangers, we not robbers, we are honest young people in an environment that is very difficult to survive right now but nevertheless we never miss a day, we get up at 5am every single day and we ply our trade.”
He highlighted that the business offers nutritious options using local fresh fruits and vegetables to provide tasty and healthy meals and beverages.

Heyliger explained that on the day of the incident, he was driving to his business place to pick up a young man who cleans up after  work day when he realised police presence in the area.

“So when I was here I saw the situation that was going on by this food truck that we’re standing by (Sheldon’s)…so by the time I pull up to ask what was the situation, I looked up and I saw the police were also at the other food truck at the North Square Street so I asked the lady what was going on so when she told me that they’re telling persons to cease operation immediately, I got parking and I was lucky enough to approach [Superintendent] Cromwell Henry and he explained to me that ‘You just have to cease and desist operation’ and they will at a later date tell us where we could relocate.”

Heyliger expressed gratitude to all customers saying: “People really support us so I don’t be around the Square for more than two and a half hours tops and I serve every single day at least 100 customers every day.”
He said most orders are sold out even before they leave home because the afternoon or night before, people would call to find out what is on the menu and place orders in advance.

For the time being with the cease and desist order, Heyliger shared that business for Samantha’s Diner would be affected negatively since “foot traffic customers” is depended upon.

“We tried the delivery system for the open days but the problem with that is you can’t gauge it  because how much persons you gonna cater for, you know what I mean?”, he noted.
Commenting on the solution he would like to see for this current matter, he replied: “I just hope that good sense prevails. First instance, they should cease the forceful removal of the food vendors from around the Square. Call us into a meeting. We are not animals; we have families, call us into a meeting, listen to us. You could tell us what you think because we have ideas also, and then before we leave that meeting place come to some amicable decision that everybody feels comfortable enough with.”

Heyliger said Bank Street is an option for food truck operations.
“I suggested Bank Street. You could give us a space there. Why I say Bank Street, the sidewalks are very wide so we’re not going to be in a situation where we are [affecting] foot traffic.”

He pointed out that there have been instances over the years whereby that street was closed off for the hosting of events including government ones, and so added “Bank Street could be locked off.”

In light of the COVID-19 pandemic, Heyliger said they had been conducting business according to health and safety protocols including him personally ensuring that customers to the food truck were standing six feet apart.
“We use social media to put out our information. At the bottom of our daily menu, we always emphasize that persons follow the COVID-19 guidelines. Since the last reopening, what I have been doing, I have been standing out in the hot sun to ensure that the customers are staying six feet apart, and I also have hand sanitizer right there…I even have a tent so the sun would not bother them too much…”

This media house recalls that at a NEOC briefing in June 2021, Superintendent Cromwell Henry said food truck vendors around the Basseterre area should cease operations by 9th July 2021.

Meanwhile, fruit and vegetable vendors who had been plying the trade on streets around Basseterre have been relocated to the Public Market following new regulations as of Friday 11th June.

UPDATE: This media house received an update after the interview that Lifespan Organic Vegan Food will be at Pond’s Pasture starting Friday 16th July from 12noon. 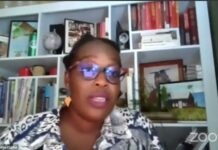 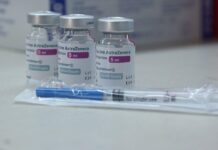 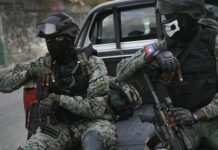