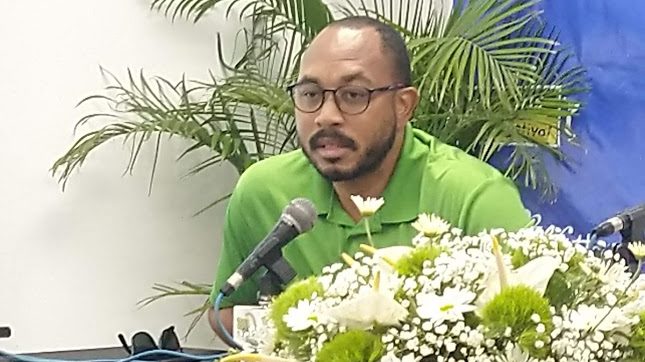 BASSETERRE, St.Kitts (Friday 19th July 2019) – Chairman of the St.Kitts Music Festival Production and Artistes Selection Committee Jonel Powell has shared his view about the use of swearwords by artistes during onstage performances saying perhaps it is time to come up with some way “ in which the artistes can be free to have total artistic creativity.”

He was at the time making a response during the question and answer segment of a post-festival press conference held on Wednesday 17th July at the Ministry of Tourism located a Port Zante.

Questioned about the law that after there was no consequences as seen in the past after an artiste used the f-word during an onstage performance of 2019 festival, Powell commented: “We continue to include in our contracts clauses against swearing and profanity onstage. However, we do allow all the artistes to have their own artistic creativity, and we don’t in any way try to influence their performances.”

As many patrons who are attended the festival are aware, well-known English R&B songstress Ella Mai, whose hits include Boo’d Up, Trip and Shot Clock, dropped the f-bomb while interacting with her cheering fans.

Powell continued: “In that instance, an artiste swore; are you going to void a contract because an artiste swore a bad word? No. We had conversations with the artiste and the management after; she (the artiste) got carried away. It might have been unfortunate; I don’t think it was something that was overly offensive to any of the patrons. We’ve certainly have seen the sort of backlash, negative publicity that came out of the incidents of the past; most recently with 50 Cent, and so we spoke to them [and] they apologised to the committee; we accepted their apology. We won’t allow that to carry any dark cloud over the Music Festival.”

In 2016, well-known American Hip Hop artiste 50 Cent, got arrested and charged for using indecent language which sparked widespread debate on the local, regional and international scenes, refreshing arguments by fans and music lovers about such profanity prohibited laws relative to St.Kitts-Nevis.

This media house notes that many fans and patrons were concerned over whether Ella Mai would have gone through a similar outcome while others were curious as to whether the laws had changed.

Powell, who is a lawyer by profession, disclosed that perhaps that the particular component of the festival needs to be reviewed.

“We continue to encourage artistes to observe that particular component of the festival but at the same time perhaps it is something that needs to be reviewed going forward. The reality is this is a night concerts that start at 8’O clock and are geared towards an adult crowd and perhaps we are at a point in time after 23 years where we need to come up with some way whether legislatively or otherwise to create a sterile environment in which the artistes can be free to have total artistic creativity while at the same time performing to a mature audience who is well aware of the artistes who are coming in… but in this instance, this wasn’t any rap or gangster rap person bussing any bad word just to show you that it can happen with anybody.”