BASSETERRE, St.Kitts (Friday 5th March 2021) – “I will not speak of my evidence and I would not go into my evidence. My evidence will stand the test of time. All I’m asking for is that whoever hears the evidence would be a person who has no perceived bias – and I want to stress the word perceived bias.”

So saidConstituency Eight Candidate of the St.Kitts-Nevis Labour Party Dr. Terrance Drew in his remarks when he appeared on Freedom FM’s ‘Issues’ programme on Friday 26th February 2021 when asked about the urgent press conference called by DPP Valston Graham on Thursday 25th February pertaining to a private criminal complaint brought against elected government minister Eugene Hamilton of the People’s Action Movement (PAM) for Constituency Eight.

Dr. Drew made it clear that “I don’t think this is a public debate between the DPP and I and so it is not set out to be that way.”

He added: “However, let’s say the foundation of the case has to do with a number of things that took place in the last election, and I want to lay that as the basis; a number of egregious things would have taken place to the point where the New York Times did an investigation into our system and the New York Times reported in its 26th of June publication that the opposition in St.Kitts-Nevis were shut down by the government and they calculated at the end of the day that democracy was under threat. We can go through and see how the government actually used the COVID situation to shut down the opposition to give themselves an unfair advantage.”

Dr. Drew, who is also the Party Chairman, gave an insight into the recent hearing plus an agreement made.

“We went to court 1st February 2021, for the first hearing, and counsel for myself invited the magistrate to recuse himself…failing which an application for recusal would be made. Magistrate Eddy asked my counsel to make an application; he did not voluntarily recuse himself initially and my counsel made reservation.  His Honor [Fitzroy] Eddy was, of course, wanting to hear what my counsel laid forth. My counsel laid forth a number of things…showing that Eddy was connected to PAM…He did not recuse himself but when my counsel brought this information to the fore Eddy recused himself and he himself revealed that he was counsel actually stood in for a case for Eugene Hamilton. Eddy knew that from before and he did not recuse himself. However, when that information came forward… he did the right thing in the end…”

According to Dr. Drew: “Before that nobody came to the court to take over the case. When we went back on the 8th, and we were supposed to be there at 9am, my lawyers were informed by the magistrate who is now [the Chief Magistrate), that the DPP wanted to make an intervention at 10:30am. The normal courteous thing that would have happened is that the DPP would write to the magistrate and he would copy that to my counsel so we were shocked to know that he was in court and then when we went he was asking for disclosure.”

He continued: “My lawyer had no chance to disclose ….they were just informed at 10:30 what would take place; they were never written to, they were never advised or invited to do the disclosure that is being spoken of and actually there was an agreement reached between the DPP’s office and my lawyers with respect to the disclosure so I want to make that absolutely clear. So it’s only when Eddy recused himself, and Eddy himself said in court and the court records would show that he was lawyers for PAM candidates dealing with election matters so that information we had to go look dig deep and study otherwise you could have had somebody favoring PAM perceived to be without judging him…perceived to be bias without us knowing had we not done our diligence and researched the information.”

According to Dr. Drew, the agreement was to have the matter be resolved the following week.

Graham in speaking to members of the media explained that in asking Dr. Drew’s lawyer to provide him with “disclosure of the evidence that he has to substantiate the allegations and charges of bribery”, he has “not done nothing that the Constitution doesn’t empower me to do”.

“I consider it to be inconceivable, absolutely nonsensical that the Director of Public Prosecution must sit back and allow a prosecution that alleges bribery against an elected official to just be pursued in a private capacity,” he expressed.

DPP Graham indicated that PAM leader Shawn Richards is his “friend” and that Hamilton is not as he highlighted that the purpose of the press conference “is simply to dispel any suggestions whatsoever that my taking over the matter has anything to do with being a political ally of PAM, Shawn Richards or Eugene Hamilton.” 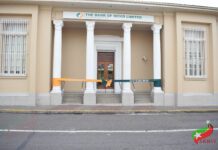