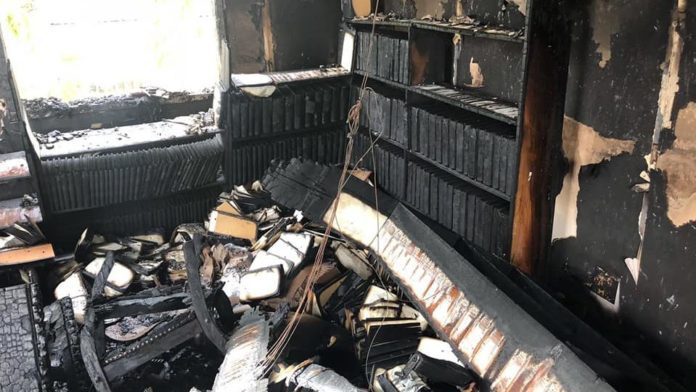 BASSETERRE, St.Kitts (Thursday 1st August 2019)- “While I understand that there might be a tendency to speculate as to the cause of this fire, I have left the matter squarely in the competent hands of our fire and police services who have promised a full investigation. I await the outcome of that investigation.”

Such sentiments were expressed by in a statement by Premier Mark Brantley via his personal Facebook page yesterday morning (Wednesday) following a fire incident at the Daniel, Brantley & Associates-located on Main Street, Charlestown-of which he is a senior partner.

“It is certainly true that we never know what each day brings. My day today started at 5am with tragic news that the main offices of Daniel Brantley were on fire. Sadly almost everything was lost. However I am happy that there was no loss of life and no injuries.”

“I thank the good citizen who saw and reported the fire to the Charlestown Police. I commend the fire and police services for their rapid and professional response. I thank our Hon Prime Minister Dr. Harris and colleague Minister Patches Liburd who traveled to Nevis to show their solidarity. I thank my Cabinet colleagues in Nevis and St Kitts who called and texted their concern. I thank so many who called from near and far including Leader of the Opposition Dr. Douglas and National Hero Sir Kennedy Simmonds. To the many who called from the region and wider world I say thank you,” Brantley, the leader of the Concerned Citizens Movement (CCM), said.

A post capturing photos and videos at the scene of the incident has been reposted to the CCM’s official Facebook page.

That  morning, a post on the official political Facebook page of government minister Ian ‘Patches’ Liburd of the People’s Action Movement (PAM) informed that: “ PM Timothy Harris and myself personally reached out to our Colleague Premier Mark Brantley in solidarity and support as he grapples with the aftermath of a mysterious fire at the Juris Building of Daniel, Brantley and Associates (as it is called). The mysterious fire took place in the wee hours of Wednesday morning but officers of the Nevis arm of the Fire and Rescue Services brought it under control.”

Speaker Michael Perkins, during a live broadcast of Parliament session in the afternoon, gave an announcement of the “unfortunate incident”.

He disclosed that he spoke to Brantley “and he would have indicated to me that he did wish to be here for continuation but given the circumstances, he was not in the frame of mind to be here and extended his apologies.”

“One of the things that touched me which he said is the fact that having the fire is one thing but when he considers that there are eight to ten persons employed there and how that would affect them. He said he was deeply moved by that fact, and so I thought I’d say that for whatever it may worth,” Perkins commented.

“While the law Firm painstakingly built over nearly 3 decades has suffered a terrible blow, I am happy that through the resilience of the committed lawyers and staff there that the Firm is today open for business and continues to conduct business from its other offices in Charlestown.”

This media house is aware that the fire incident is being widely discussed with political chatter by members of the public.