To sensitize and engage citizens in managing their waste in an environmentally and socially responsible manner, the Government of St. Kitts and Nevis has taken a decision to lead by example and begin the process of waste separation and recycling at Government Headquarters.

Dr. Marcus Natta, Cabinet Secretary, who once worked with chemicals and waste at the St. Kitts and Nevis Bureau of Standards led the recycling initiative on Friday, November 04, 2022.

The initiative is a collaboration between the Government and Let’s Recycle SKN, a non-profit organization headed by Taiwan ICDF. The initiative is strongly supported by members of government including Prime Minister the Honourable Dr. Terrance Drew who “advocates for us conserving and protecting the environment” and Minister of Environment, the Honourable Senator Dr. Joyelle Clarke who is “very keen on the protection of the environment.”

“We are pleased to have a group from Let’s Recycle SKN with us who are donating some recycle bins for us to do plastic bottle waste separation in particular. We know that plastic is a major issue around the world and especially here in St. Kitts and Nevis,” he said. “We are very pleased to start the initiative today, and our custodians have played an important part in generating data for us over several weeks and the staff has already come on board and is assisting with separating the waste.”

Joyce Chang, Project Manager of the Waste Management Project at Taiwan ICDF said that the initiative will yield several benefits.

“Of course, the first benefit for our island is a clean environment. Another benefit is the opportunity to recycle as opposed to the waste going to the landfill and creating a pollution issue; so that is good for our environment,” she said. “I think everyone can change their daily behaviour to sort their waste. We can work together and make better environmental [decisions] in St. Kitts and Nevis.”

Dr. Clarke applauds the joint project with the Cabinet Secretariat and the ROC (Taiwan).

“We recognize that the move to banning single-use plastics starts with these small but critical steps directed towards behavioural change and waste management,” said the Environment Minister. “This is a positive move to be followed by various government departments. We will not only legislate the changes but we will also encourage positive social and environmental behaviour. It starts at GHQ and the Cabinet Secretariat.”

Bins will be installed on each floor of Government Headquarters to place plastic bottles. Signage will also be installed to help with the education drive.

According to Dr. Natta, the idea is to expand the initiative throughout the entire government service. The Ministry of Foreign Affairs recently embarked on the same project to separate their waste. 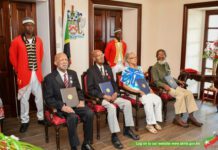 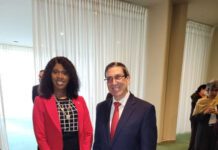 St. Kitts and Nevis Says U. S. Embargo on Cuba is Unjust and Calls for It to End 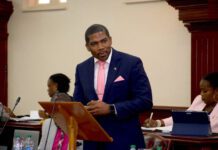 Prime Minister Dr. Drew Urges All to Tune in to Friday’s Sitting of the National Assembly as Four Important Bills Are Scheduled to Be... 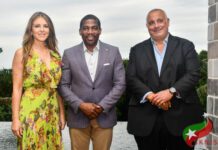