Minister of Foreign Affairs et al. of Saint Kitts and Nevis, the Right Honourable Dr. Denzil L. Douglas, on Thursday, 27th October, 2022 received a high-level delegation from the Republic of Korea. The eight-member delegation, led by Special Envoy and Senior Secretary in the Office of the President of the Republic of Korea, Mr. Sungmin Jang, visited the Federation primarily to discuss support for Korea’s bid to host Expo 2030. The delegation also included Korea’s Non-resident Ambassador Extraordinary and Plenipotentiary to the region, His Excellency Mr. Inho Lee.

During the meeting, which also discussed the exploration of several areas of mutual interest between both countries, Foreign Affairs Minister Douglas emphasized the need to collaborate on establishing more manufacturing industries for Saint Kitts and Nevis as a means of increasing job creation for citizens of the Federation. The Minister also stressed the importance of re-implementing the ‘1-1 laptop programme.’ This improved computer literacy in schools, he stated, would only redound to the benefit of the Information Technology sector of the Federation.

In addition, the Minister discussed the important link between Agriculture and Fisheries in our Small Island Developing State and categorized the fishing industry as a growing sector of our economy that can be further developed via improvements to existing fisheries complexes to diversify the market.

Further, Minister Douglas touted that the island of Nevis has great potential for high-capacity geothermal production. He implored that a geothermal production facility in Saint Kitts and Nevis could potentially push the Federation one step closer to achieving green energy and ultimately a green economy. The visit concluded on 28th October, 2022. 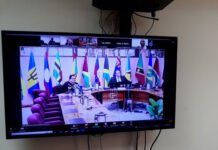 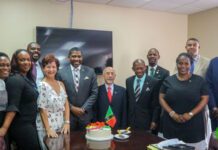 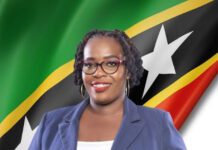 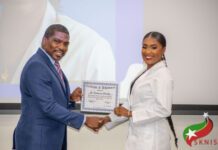