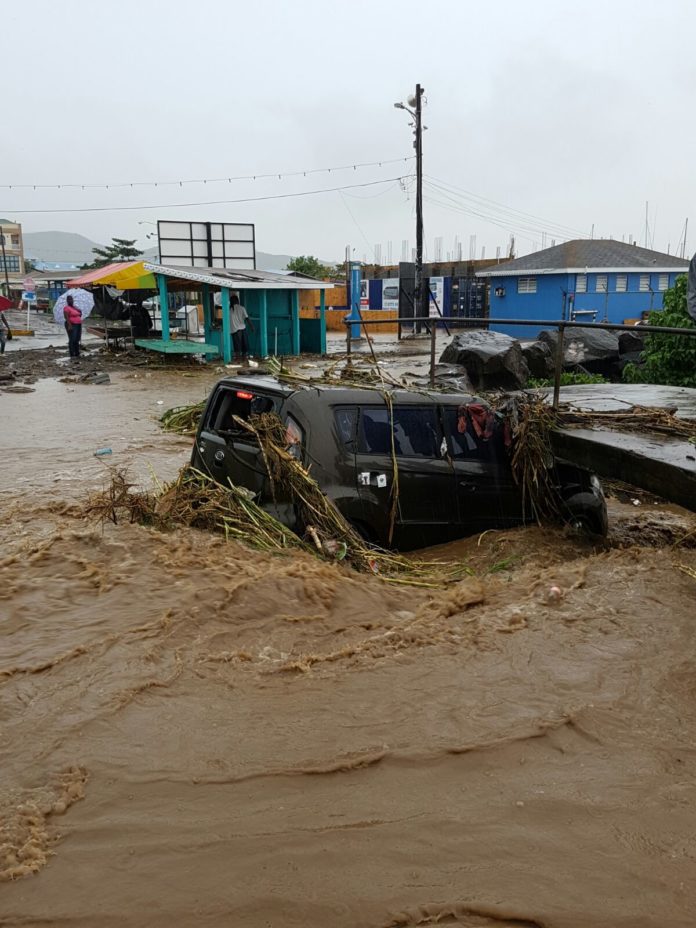 BASSETERRE, St.Kitts– Yesterday’s (Thursday) heavy rainfall caused by the passage of a tropical wave resulted in massive flooding from ghauts that overflowed, and the island’s capital of Basseterre was one of such areas affected.

Via social media, particularly WhatsApp and Facebook, many people shared videos and photos that generally captured what the stormy atmosphere was like on the island.

Scenes from areas like College Street, Old Road and the Bay Road created jaw-dropping reactions from many residents who were apparently shocked to see such impact from the rainy weather.

In one eyewitness photo, a woman is seen looking on with an umbrella along the Bay Road in the vicinity of the Bus Terminal in Basseterre as a vehicle washed away by floodwater is stopped by a bridge near the Public Market.

He reported that a tropical wave was experienced overnight resulting in heavy showers causing ghauts to flow heavily which affected the free movement of vehicular traffic.

He further pointed out that as a result of the roads being unsafe and that the St.Kitts Met (Meteorological) Office advised that the weather would have improved as the day progressed, “the government took the decision not to have work that morning all in the interest of public safety.”

Notably, schools were closed all day, however.

The NEMA official offered some advice to the public amidst the already started hurricane season which runs from June to November.

“…in the hurricane season, try to achieve a high level of preparedness. Listen to local media for weather information. NEMA will collaborate with the Met office which is the competent authority in relation to weather bulletin. As the need arises, NEMA will communicate the information to the public.”

He also encouraged residents to be caring of each other especially those with special needs- for example those individuals who would need medication-, children and the elderly as well persons who may be unable to leave home due to having an illness or the like.

Herbert urged persons in the construction sector as well as the automotive repair sector “to have a plan in place to secure items on your premises that can become missile in high winds resulting in injury or death.”

In this eyewitness photo, one woman is seen looking on with an umbrella along the Bay Road in the vicinity of the Bus Terminal as a vehicle washed away by floodwater is stopped by a bridge near the Public Market.