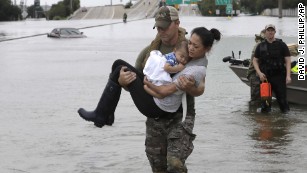 “Our whole city is underwater right now but we are coming!” Port Arthur Mayor Derrick Freeman posted Wednesday morning on Facebook. “If you called, we are coming. Please get to higher ground if you can, but please try stay out of attics.”
Port Arthur — about 90 miles east of the devastated Houston area — is so deluged that floodwater has overwhelmed an evacuation center. Murky brown water nearly reached the top of cots at the shelter.

Evacuees at the Bob Bowers Civic Center in Port Arthur are inundated again when the shelter got flooded.

The situation in Port Arthur is so dire that police are asking for volunteers to bring boats and help.
“Rescue boats welcome in Port Arthur to assist emergency personnel,”the police department posted on Facebook. The city is asking anyone trapped to hang a white towel, sheet or shirt outside to alert rescuers.

Rescue boats fill Tidwell Road in Houston as they help flood victims evacuate the area on 28th August.
The disaster in Port Arthur is part of Tropical Storm Harvey’s devastating encore. Harvey made landfall once again Wednesday morning, slamming into the Louisiana coast near the Texas border.