BASSETERRE, St. Kitts (Tuesday 28th April 2020)-Deputy Labour Commissioner Dr. Deon Webb has raised a concern that workers in St.Kitts-Nevis are being asked to use their holidays during the period of total lockdown amidst restrictions regarding the novel coronavirus (COVID-19) which goes against the Holidays With Pay Act.

“It has been brought to the attention of the Labour Commissioner’s Office that employees are being asked to use their annual paid holidays on the days when the Federation is on 24 hours lockdown,” he expressed in a statement issued on Tuesday 28th April 2020 whereby he quoted the relevant sections in addressing the topic.

Dr. Webb pointed out that the Holidays With Pay Act Cap 18.15 of the Laws of Saint Christopher & Nevis section 3 (5) reads: “The annual paid holiday shall be given and taken in one period or, where the employer and worker so agree, in two periods and not otherwise, and every such agreement shall be in writing signed by both employer and worker.”

He also underlined Section 3 (8) of the said act which states: “Subject to the provisions of this Act, the employer shall decide upon the date on which the annual paid holiday shall commence in accordance with subsection (7) of this section and shall give to the worker not less than seven days notice of such date, provided that such notice may be waived by mutual consent in writing.”

The Labour Department official went on further to highlight, section 4 (2) reads: “Every worker who takes his or her annual paid holiday in one period shall be paid the holiday pay referred to in subsection (1) of this section not later than the day immediately preceding the commencement of such holiday.”

Additionally, he touched on section 4 (3) states that: “Every worker who takes his or her annual paid holiday in two periods shall, not later than the day immediately preceding the commencement of each of the two periods of holiday, be paid that portion of his or her holiday pay which is in the same proportion to his or her holiday pay for fourteen days as the number of days holiday about to be taken by him or her is in proportion to fourteen days.” 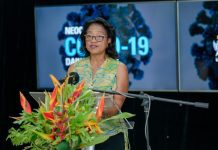