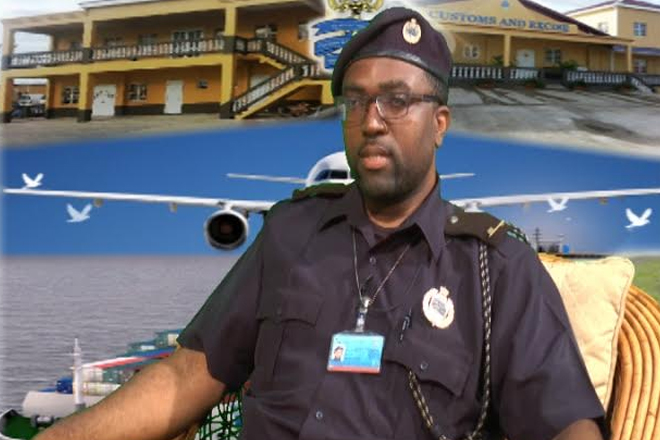 BASSETERRE, St. Kitts (Wednesday 16th August 2018)- Yesterday, a cell-phone video widely circulated via social media, particularly Facebook and Whatsapp, captured a controversial issue involving a well-known vocal customs officer Larry Vaughan during a confrontation with three police officers before being placed under arrest, and now he is currently out on bail stemming from that situation.

According to information received by this media house, Vaughan has been slapped with at least four charges including Resisting Arrest and Battery on a police officer and that he received bail yesterday (Tuesday).

The video recording took place while Vaughan was in his office space at the Customs and Excise Department located at Bird Rock in Bassterre.

In that 1 minute-36 seconds video filmed by Vaughan himself, he could be heard saying to a female cop “Officer, do not touch my phone” as she proceeds to tell him “You are under arrest for trespassing.”

One of the officers apparently took his phone away and he could be heard requesting “Officer may I have my phone please.”

During a verbal exchange with the female police officer, he also expresses “Let me take my bag and leave…officer do not touch me” to which the officer replies “Well, take you bag and leave.”

The female cop also tells Vaughan that “I’m going to charge you with resisting Arrest and Battery on an officer” which was verbally challenged by Vaughan who seems surprised at that claim and responds while putting his bag together “You’re arresting me?”

Nearing the end of the video, Vaughan-who is dressed in his uniform- says “I have it recorded so you are not going to say anything that I didn’t say.”

In a letter dated 13th August from Chief Personnel Officer (Human Resource Management Department Office of the Prime Minister) S. Warner addressed to Vaughan, he is told that “I have been directed to inform you that you are to proceed on administrative leave with effect from today 13th August 2018 until further notice.”

In the video, Vaughan also shares that “I wrote back to the person who said I was on leave.”

The bailed customs officer was a hot topic on social media one week ago for a piece penned to Prime Minister Dr. Timothy Harris in which he cited areas of alleged victimisation and an analysis of his perception of poor leadership.

That letter dated Wednesday 8th August comprises of over 1500 words.

Public speculation abound as to the reasoning behind Vaughan’s work dismissal.

More on this matter as information becomes available including coverage in this weekend’s paper.