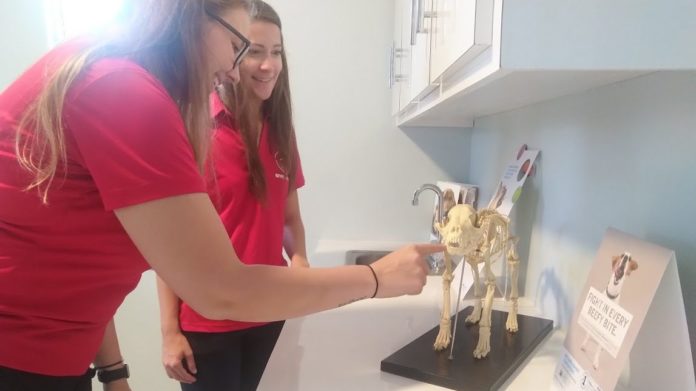 BASSETERRE, St.Kitts (Friday 2nd August 2019) –Caring for a puppy no one wanted along with seeing stray dog on the island in need of care created a passionate vision for St.Kitts-Nevis national Mala Weston to one day see the construction of the first animal rescue shelter in the Federation, and this week a cutting ribbon ceremony marked the occasion dreamed about nineteen (19) years ago.

On Tuesday this week (30th July), a collaboration between Ross University School of Veterinary Medicine and non-profit organisations PAWS (People for Animal Welfare on St. Kitts) and SAFE (Saving Animals From Emergency) saw the opening of the St.Kitts Animal Rescue Centre (BARC)  located at Lime Kiln Institutional and Commercial Development in West Basseterre.

Weston, BARC Co-Founder and Treasurer who is also PAWS Co-Founder commented: “My Shultz story is not unique. Many persons have had and can be fortunate enough to have a chance at such a relationship. Stray dogs, unwanted dogs- given a second chance are notorious for being the most faithful, loyal, devoted and protective pets. All lives matters. Every living creature deserves to be treated humanely and sometimes we just need to be an advocate for those who can’t speak up for themselves …”  Weston remarked having shared her story about the first dog she owned, a Rottweiler named Shultz, which changed her life.

BARC Construction began late June this year and phase one is nearing completion. Features include a reception area, examination room and also an open pavilion (for community events, education programmes, adoption days and fundraising activities) in building one while building two has six kennels.

The next phase which is expected to begin shortly will see an additional 18 kennels being built.

The mission is to build a self-supporting animal rescue centre for dogs, and eventually cats.

In speaking about Shultz, she outlined: “Twenty years ago, something happened that changed my life and I want to share that story with you. Twenty years ago I got a dog; it was my first dog and he was the runt of the litter; the one no one wanted. His name was Shultz. I did a little book reading; there was no Google back then and I learned about caring for him and I learned about training him to obey simple commands and I learned that during training I should use praise and affection as his reward. I kept him close, I treated him with respect, I took care of his basic needs, I gave him a little attention and I gave him a little love and Shultz grew to be the best dog ever. He was kind, he was intelligent, he was loyal, he was protective-anyone who knew Shultz would agree with me. I realized that with not too much effort on my part, we had developed one of the most rewarding relationships. It was a relationship that opened up a totally different place in my heart. Shultz paid attention and he just wanted to please.”

Weston continued: “I then started paying more attention to the dogs that I’d see on the streets. Though some seemed quite content, there were others in need of food, they were in need shelter and they were in need of medical care. The sad truth is that animal cruelty, neglect and often a lack of respect and a lack of appreciation and value for their life exists.”

“I wanted to help but it was difficult with no place to take these animals that I saw that were in need and there was no real knowledge on how to help them,” she added.

In mid-2000, PAWS was established by Weston and American veterinarian Dr. Karen Smithwick-Kier.

As gathered, Dr. Smithwick-Kier was not working at the Ross University but her husband was a student there and her daughter attended Weston’s Montessori Children’s School.

“It’s often said that everything happens for a reason and that nothing happens before its time. As luck would have it, I then met a like-minded veterinarian Dr. Karen Smithwick-Kier… We got to talking and we had similar interests and similar concerns and we started PAWS and that was 19 years go,” she shared.

In speaking about PAWS’ two main goals, Weston highlighted: “Our first goal was to help reduce stray animal population through education programmes and through surgical sterilisation and our second goal was to build an animal shelter.”

She added: “We knew we needed this dedicated space where persons can bring abused, neglected, injured and ailing stray animals to be cared for. We knew that through rehabilitation, these animals would have an opportunity for a better life and a forever home.”

Following the ribbon-cutting ceremony, there was a tour of the facility.