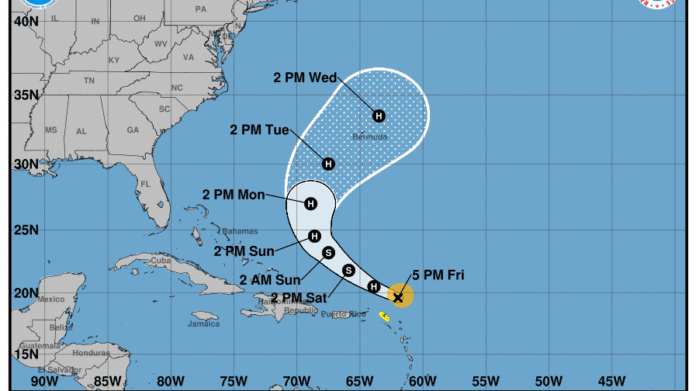 No watches or warning are in effect. Hence, no specific action is required of residents other than to monitor the progress of Jerry until it clears the area.

The National Emergency Management Agency (NEMA) has informed that “based on the current path, Hurricane Jerry’s centre is projected to pass safely to our North, thus sparing the Federation the worst of the system’s conditions.”

Persons are also urged to continue to monitor local media for further updates and statements, as weather is dynamic and can change without warning.

Jerry is moving toward the west-northwest near 17 mph (28 km/h). On the forecast track, the center of jerry will move north of the northern Leeward Islands later today and north of the BVI on Saturday.

Data from the air force reserve and NOAA hurricane hunter aircraft indicate that the maximum sustained winds have decreased to near 85 mph (140 km/h) with higher gusts. Further weakening is forecast during the next day or so, with some re-strengthening possible early next week.

Based upon the latest position and analyses, hurricane jerry is projected to pass at a safe distance of over 100 miles to the north of the leeward islands and British virgin islands today and tomorrow; however, cloudiness, showers and gusty winds associated with the system could move across the leeward islands later today and tonight to produce some showers and thunderstorms some of which could be moderate to heavy at times.

As a precaution, mariners are asked to stay in port and avoid the beaches for the next 12 – 24 hours until jerry passes to the north of the area.

No watches or warning are in effect for the Leeward Islands and British Virgin Islands; hence, no specific action is required of residents other than to monitor the progress of jerry until it clears the area.

At 5:00 AM today -The center of hurricane Jerry was located near latitude 18.4 north, longitude 58.7 west or about 223 miles east northeast of the Leeward Islands and 387 miles east of the British Virgin Islands.