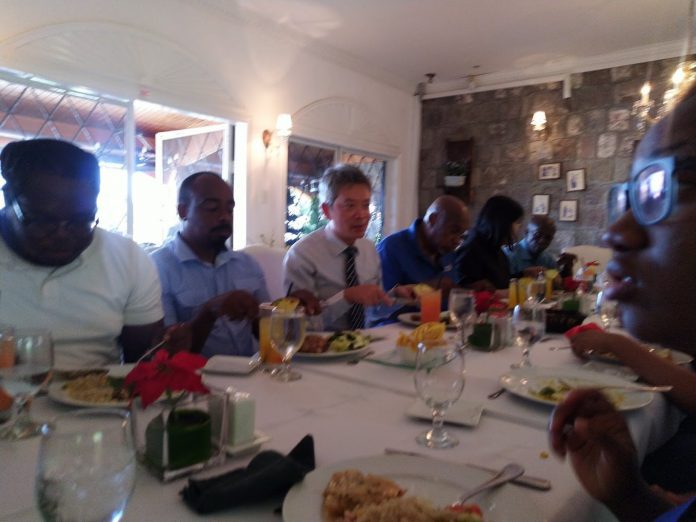 BASSETERRE, St.Kitts (Friday 13th December 2019)–Resident Taiwanese Ambassador to St. Kitts-Nevis Tom Lee has shared his observation as it relates to the media freedom that exists in the Federation.

“I see the media here actually as similar to all media in Taiwan because our media in Taiwan, they have can have a different stance; they [don’t just] report what they think is the truth, and I think the media here is very similar. So, I think that’s why we are democratic and also we enjoy the freedom so I think it is important.”

He shared such thoughts while responding to this reporter during an interview following an annual Christmas luncheon courtesy the Embassy of the Republic of China (Taiwan), held on Friday 6th December at Palms Court Gardens located Fortlands whereby local journalists, editors and other media workers were invited as special guests of the ambassador.

“Today, basically you know usually at the end of the year, we invite our friends form the media to sit down and have a very casual lunch. Basically, it is to help them to know of our embassy and close friendship (with St.Kitts-Nevis) so that’s the main purpose of today’s lunch. We of course have a prepared a small gift as a token of our appreciation for the past eleven month you have kindly provided to us,” Lee told.

Asked what areas is expected for media coverage in the upcoming year from the embassy’s end, Lee highlighted that such would be known after the elections in the Republic of China (Taiwan) come next month.

“We are going to have elections in January so our embassy basically we have to wait until January and then we know whether or not if the government is the same so it’s difficult to say it right now what we are going to do next year but our embassy, we want to focus more on green energy and also some environmental issues that is probably what we are going to do more next year, and of course, we will also focus on human resources development and we hope that we can provide more, and send more people to Taiwan to study because I think it’s important.

The 15th President and Vice President election is slated to be held in Taiwan on Saturday 11th January 2020.

When asked by another reporter to describe the diplomatic relationship between St.Kitts-Nevis and the Republic of China (Taiwan) over the course of 2019, the local Taiwanese top official had this to say: “This year, our embassy has been very busy. Let me give you an example: Your Prime Minister visited Taiwan in April, your Foreign Minister led a delegation to visit Taiwan in May and then our Foreign Minister visited St.Kitts and Nevis in May followed by our President visited St.Kitts and Nevis in July and then you Speaker [of the national assembly] visited Taiwan in October so you can tell our embassy has been very busy and the relationship between our leaders is very, very close.”

Notably, this reporter also travelled the Republic of China (Taiwan) in October as a St.Kitts-Nevis representative as part of the grand celebration is a Double Tenth National Day Press Tour for the 108th National Day on the 10th of the tenth month.