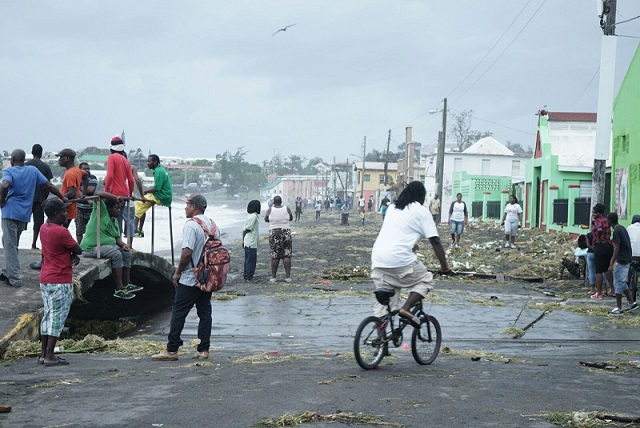 BASSETERRE, St.Kitts– Three weeks after being spared a direct hit from hurricane Irma, the Federation of St.Kitts and Nevis once again did not get the full impact of another disastrous storm hurricane Maria during its passage here on Tuesday 19th September- Independence Day.
The hurricane warning was discontinued effective 8:00pm on Tuesday, September 19, 2017. However, but a flash flood watch remained in place until 8:00 am the following day (Wednesday).
Fallen fences, messy coastal areas, damaged house roofs as well as downed power lines and trees were some of the tell-tell signs that the hurricane’s eye passed dangerously close the Federation.
Old Road Bay was one of the most affected areas on the island.
An immediate advisory was issued warning pedestrians and motorists that the area was impassable due to falling debris and rocks, and huge swells breaking on the mountainside of the road.
That the section of the road is expected to be reopened tomorrow (Friday 22nd September).
In the recovery efforts after the storm, workers from the St. Kitts Electricity Company (SKELEC) were out and about in an effort to restore services to residents around the island.
For some residents in Basseterre, there was no disruption in electricity supply.
Generally speaking, running water was restored to communities within a short period after the hurricane.
On the day of the storm’s passage, the National Emergency Management Agency (NEMA) reported that at 5:00pm, Hurricane Maria had intensified slightly.
It was further stated that it remained a powerful and dangerous hurricane with sustained wind speeds of 165mph and minimum pressure of 916mb, noting that it remained a dangerous Category 5 hurricane.

The storm’s center at that time was located 16.8N 64.0W or approximately 90 miles west-southwest of (Basseterre) St. Kitts and Nevis, moving: WNW at 10mph.
NEMA also reported that on that path, the eye of Hurricane Maria would have continued moving further away from St. Kitts and Nevis.
Additionally, it was forecasted that some outer feeder- bands of Hurricane Maria would have continued to generate stormy conditions across most of St.Kitts and Nevis into the night.

On the morning of Wednesday 20th September, Government declared a public holiday and national Clean-up Day after the all clear to the public after the storm.

With a few exceptions, government educational institutions opened yesterday (Thursday) at the usual time including early childhood centres, primary, secondary and tertiary level institutions.
The exception list included Cotton Thomas Comprehensive (formerly Special Education Unit) as well as the Industrial Site and Mc Knight day care centres. However, all staff of those institutions were asked to report to work by 8am.
The two day care centres are expected to reopen today (Friday).
Additionally, as a result of the closure of the Old Road Bay road, students from the Verchilds High school living in the Challengers, Palmetto Point, Boyds and West Farm areas are asked to be on the road no later than 7:30am to be transported to school via Cayon.
Before making its way to St.Kitts-Nevis, hurricane Maria made landfall on the island of Dominica late Monday (18th September) causing loss of lives (at least fifteen) and major property damages to homes and other buildings in the aftermath of its passage.
In an immediate response to the country’s catastrophic hit, Opposition Leader of the St.Kitts-Nevis Labour Party Hon. Dr. Denzil L. Douglas issued a message of hope saying as part of his outreach that: “The people of Dominica can be assured that we here in St.Kitts and Nevis especially those of the Parliamentary Opposition and the Labour Party will do all within our power and as much as we can to help return Dominica and its people to a state of normalcy.”
Yesterday (Thursday) Dr. Douglas, in an official statement, appealed to the Team Unity Government led by Prime Minister Harris “to reach out to the Government and people of the commonwealth of Dominica who were dealt an enormous blow in wake of Hurricane Maria.”
After passing St.Kitts-Nevis, that storm also made its way to the US Virgin Islands where Hurricane Irma had cause much destruction.
Islands Puerto Rico and Dominican Republic were also affected along the storm’s continued path.