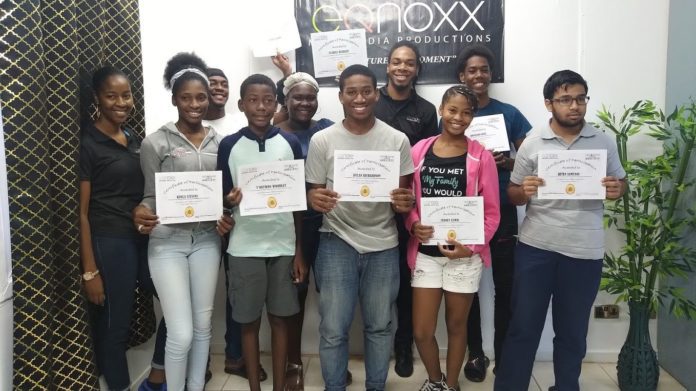 BASSETERRE, St.Kitts (Wednesdayy 21st August 2019) – “Be creative; never limit yourself. If you have a dream and you have a goal, push through it. Some people might tell you otherwise but don’t listen to them.”

This is the advice of 21-year-old business owner of Eqnoxx Multimedia Productions Noel Nicholls to participants of the recently held five-day photography camp as expressed during an interview with this media house following a closing ceremony held on Friday 16th August at the office location at The Circus in Basseterre.

Collectively, their printed images captured during the workshop were put on display for an exhibition.

In giving an overview of the workshop, Herbert said it “was a very successful workshop…I had a wonderful time.”

She shared the subject definition that “photography is the art or practice of taking pictures.”

“So basically, photography is like using your creative style to take different images, to tell a story, to capture a moment. There are also different types of photography such as abstract, animal, astro, aerial, black and white etc. We also learnt about different lenses such as the zoom lens and the prime lens,” Herbert added.

The two types of paper that photos are printed on namely matte and glossy was also a topic.

Additionally, she pointed out that they were taught about visa and passport rules and regulations noting that  “such as with visa, there is no eyewear to be worn when you are taking pictures, your ears must always show, your hair has to be up if it is down and you also have to have a straight and upward position.”

“We learnt that when you are dissembling a camera, it is best to hold it downwards so that there is no dust would be able to enter the camera that can mess up the stencils because that would be a big problem. We learnt about the under exposure and the over exposure of picture; under exposure is when the lighting appears too dark and to over exposed is too bright and you might not receive all of the details of a photo,” Herbert shared.

Pertaining to more hands-on learning, she talked about the activities involving the drone which is “an unmanned vehicle controlled by a remote control for aerial photos of a landscape or wide area.”

For this area, the photography students were instructed on the different flight modes and also how to assemble and dissemble the device.

“All in all we had a wonderful time at this camp. It’s a good experience and I think everyone should experience especially any young persons who is interested in photography and videography. It was a wonderful experience, I had a great time and I met many people; many people with different personalities,” Herbert said.

Speaking with this reporter ahead of the ceremony, she extended “A big thank you to Noel and his team for taking the time out to create this camp and think about the different activities for us to do.It was a really enjoyable one.”

Other participants expressed similar sentiments too.

Evron Dore-“I feel like this is the best thing I did all summer because I’ve been shooting for a year now and to see the amount of things that I was doing wrong, this really opened up my eyes to do better. With me trying to start my own business [Norvee 300 Photography & Designs], this has helped me even better so if I was good then I’m greater now. I would like to thank Eqnoxx for this workshop; I really appreciate it.”

Vontwon Woodley- “It was great because I learnt more stuff about cameras and drones. I take pictures with my phone but sometimes I would use my uncle’s Sony camera. I think this is something I want to so when I get older.”

Hiten Samtani –“Photography is really fun. It was better than I expected. It’s not that hard to take a photo and edit it. It’s really nice holding the camera. Flying the drone was also fun. I crashed the drone on my first try but on the second try I went slower so that it wouldn’t crash.”

Keola Stevens –“I would say it opened my understanding about photography more than what I knew already. I’ve learn a lot about taking pictures, how to edit and about the camera. Taking photos is more like a hobby but I’m really interested in photography.”

Dillon Richardson –“The workshop was an interesting one. I learnt new things. I already knew some of the basics of photography but I realized that there was much to be learnt, and I also met new people. It was a really fun one.”

Showing one of his images on the exhibition table, he explained: “This is a photo of the salt pond…and it came about when were about to do a landscape but I didn’t want to do any boring landscape so I tried to find something that was different so I came up with the idea to shoot inside the salt pond and this was the result.”

Nicholls informed this reporter that  the workshop was “better than I expected to the extent that we got a lot done but they surprised me with how far they caught onto certain things  so we  actually moved on to certain stuff that could have gone on over into another week.”

According to him, it is hoped that the camp would be an annual one.

Notably, Stevens, Herbert and Dore have been selected to undergo internship at Modern Elegance Photography that is seeking someone for full- time employment.

As understood, the company asked for three candidates and is expected to choose one.

These three individuals were chosen based on their participation and the product of work that they produced at the camp.

Nicholls has expressed gratitude to members of the local media for their support including this newspaper as well as Mulley Media, SKN Newsline, ZIZ and Carib Beacon Marketing Solutions.