His advice- given in Parliament on Wednesday 12th February 2020- comes in light of this this week’s deadly boating accident in the Potato Bay area which claimed the life of a visitor from the US.

Police are currently investigating the accident which occurred at sea sometime after 7 p.m. on Sunday 9th February 2020.

Reportedly, investigations so far have revealed that a dinghy, which had two occupants, and the MV Caribbean Explorer II collided in the Potato Bay area following which the St. Kitts and Nevis Coast Guard was called and responded.

Police say Austin Edwards, a native of Ohio, U.S.A. who resides in St. Kitts, was taken to the JNF Hospital by members of the Emergency Medical Service and warded in a stable condition.

Doran experienced difficulties at sea and drowned. He was pronounced dead by the District Medical Doctor.

Both men were in the dinghy.

The occupants of the MV Caribbean Explorer II were unharmed.

The media has been informed that police investigations into the matter are ongoing, and that the Maritime Affairs Department will also carry out an investigation into the incident.

In February 2018, another overseas visitor, 24-year-old Keryan Grimault Queret of France, died following a boating accident that occurred off Pinneys Beach in Nevis at about 4:30 p.m. on Saturday 24th February.

He was pronounced dead on the scene.

Police investigations revealed that Queret was struck by Motor Vessel “Good Luck,” which is owned by Vincent Perkins but was being operated by someone else.

The Coxswain (the person who steers the boat)  in police custody assisting with investigations which are ongoing.

An autopsy examination done by Resident Pathologist, Dr. Adrian Quintana-Nunez, concluded that the cause of death was due to traumatic shock with multiple traumatic injuries as a result of a collision with a boat.

Minister Liburd, during his presentation, commented that the Department of Maritime Affairs is conducting investigations into “two serious boating accidents.”

He said that department “is working in collaboration with the St.Kitts- Nevis Coast Guard and the Royal St. Christopher and Nevis Police Force to establish the cause of these accidents but in the meantime I must implore those boat captains, those fisher folks who are going [to] with their pirogues especially early morning or late night, you have to be conform to the marine requirements.” 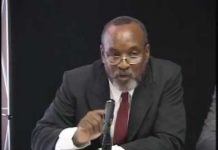 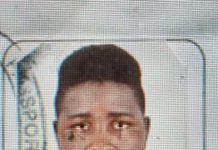