BASSETERRE, St.Kitts (Tuesday 31st December 2019) – Streets stained with paint and confetti sprinkled about were some of the tell-tell signs of the feting mass of hundreds of revellers who took part in the annual J’ouvert jamming- Sugar Mas 48 style throughout the streets of Basseterre on Thursday 26th December 2019.

Various troupes and jam bands created the usual party atmosphere in revelry for one of the most anticipated events on the annual National Carnival calendar.

Speaking in the national Assembly the next day (Friday), Prime Minister and Minister of National Security Dr. Timothy Harris informed that there were no gun violence.

“Yesterday, I’m advised by security officers that we had one of the largest crowds ever participating in our annual J’ouvert jam, which was marked by the high level of revelry and merriment which was palpable everywhere. We give thanks that there were no gun-related incidents reported by the police, and in particular there were few transgressions of the law or criminal incidents in general.”

Unconfirmed information reaching this media house indicates that there was at least one stabbing incident.

More details in a follow-up report. 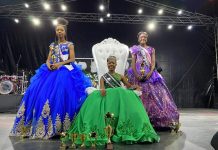