BASSETERRE, St. Kitts (Friday 8th January 2021)- Fresh concerns have been raised by residents of the West Farm and Boyd’s communities about speeding drivers, particularly bus operators, in light of a bus crash that took place within the vicinity of the ghaut area.

This media understands that the vehicle was traveling to Basseterre when the accident happened on Wednesday 6th January 2020 sometime around 12noon.

It is further understood that the public transport vehicle that was carrying passengers crashed into a utility structure owned by a telecommunications company. A small vehicle is said to have been involved also.
Cellphone video footage seen of the aftermath of the accident shows an extensively damaged bus and passengers hurt.

A woman in her 40s speaking to this media house –choosing not to disclose her name- expressed that the “community is fed up now and needs the traffic department to do something about the situation.”

“The Traffic Department really need to do something about these accidents that always happens in West Farm and Boyd’s. Please don’t let anyone one else lose their life. Since am a child, I see so many lives lost and many get injure, 40 plus years now and still happening. We are in two school zone areas and the driverS don’t seem to care. This accident that happen today could have been avoided but I thank God that the electricity was off. I pray for a speedy recovery for all the passengers.”

A male resident commented: “Not all of them but I feel some of those bus drivers are too careless and reckless. I saw pictures of the accident and I said, it had to be that the driver was speeding. Some of them drive like driving sheep and not human beings. There are some who drive with caution and then it got some of them who don’t care, and sometimes you try speaking to some and they don’t listen; they will still carry on like they driving like cargo.”

Another female is of the view that the bus drivers need to change their behaviour on the road.

WC- “There is a lot of speeding across the area and a lot of overtaking  that takes place in the ghaut area slow down because a ghaut is right there. Those bus drivers are not learning from what has happened in the past. There have been a few accidents but it’s those busman mostly to blame. I understand that the accident happened around lunch time which is like a rush hour session for them. They need to be careful. Some of these bus drivers stop anywhere to let off passengers-no indicating nor hand signal to let the drivers behind know their intentions; they just stop just like that, they don’t care who behind. As short as the distance is things, could happen.”

Up to press time, there was no information from the Traffic Department regarding the accident. 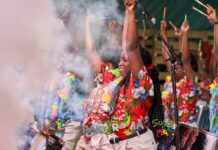