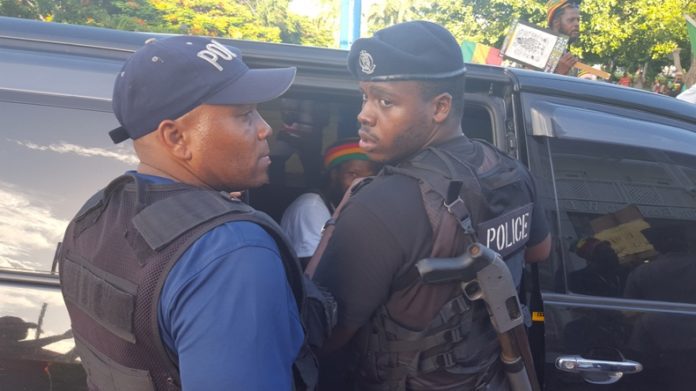 An arrested Rasta man seen inside a police van, surrounded by two police officers, following the annual marijuana march organised by the Organisation of Rastafari in Unity (Spokesman Snap)

BASSETERRE, St. Kitts– On the afternoon of Friday 25th August, chants asking to ‘Free The Herb’ turned into ‘Free The Brethren’ after police arrested a Rasta man during the start of the annual rally segment of the event organised by the Organisation of Rastafari in Unity (ORU).
The controversial matter took place at the Independence Square as members of the Rastafari community and other supporters for the decriminalisation and legalisation of marijuana gathered together shortly after the march.
After a fiery period- spanning more than 10 minutes- which saw some event attendees attempting to have discussions with the police and expressing sentiments of unjust treatment in relation to the arrest, came about a decision to resume the rally because the arrest was a distraction.
The arrested Rasta man was placed inside a police van parked on West Independence Square Street.
ORU Chairman Ras Iroy, from the sister isle Nevis, during an exclusive interview with this media house having observed the situation, opined that the police wanted to show their powers.
“I really can’t speak as to the exact of what happened in terms of one of our brethrens being taken away by the officers but in talking to a few of my brethrens, it had nothing to do with any crime or violence so the police I think wanted to show their powers.”
He added: “I think the police really could have used their discretion seeing the nature of this event- a ganja rally. The police know that this organisation is no stranger when it comes to promoting the use and legalisation of the herb, we are no stranger to advocating for the legalisation of the herb so I think it was no strange reason, no surprise as to why we are here and so I think police should have used their discretion and that situation could have been avoided.”
“I think they succeeded in a bit because they did take the attention (but) you know Rasta people, we stick together for one another in unity…” he pointed out.
Ras Iroy also shared that “the way the officers were armed; they took all their straps off their guns and that kind of thing as if they were ready for trouble.”
Another ORU member, Ras Sankofa, in speaking with this media house, said the arrest was a distraction.
“…Instead of us just focusing on the event in the Square…because of the arrest, we have to put our efforts into trying to free up the brother and having a discussion with the police that ain’t even really so necessary if they didn’t arrest him.”
“We had to make a conscious decision to don’t let the police distract us but to go back to the rally,” he added.
Furthermore, Ras Iroy, in speaking more on his scrutiny of the police, accused officers of not safely controlling the traffic while some event attendees were trying to address the arrest matter.
“I literally took pictures of officers calling the traffic through when brethrens are standing up in the road, trying to get some ‘overstanding’ as to what happened to our brethren when the officer just there calling the traffic through, making utterances saying ‘let dem stand up dere then.’ I think that was totally out of order and I took some pictures and I hope to go further with it.
“If the police in anyway felt like the traffic was being obscured, they were supposed to stop the traffic, clear the traffic and then allow the traffic to come through instead of calling the traffic to I and I,” he suggested.
In accordance with Ras Iroy: “I don’t think the police came around to protect me and me from anything. We asked for the police permission and we got permission for a peaceful protest and there was no imminent threat to the general public or anyone so basically, there was no real reason why the police had to be here in these kind of numbers.”
He commented further: “When I watched the way in which the officers were armed, it give you the sense that they didn’t just come out to see what the march was all about but in fact I think they came out to halter I and I progress, to interfere with I and I trod because I again as I say, we had permission for a peaceful trod. We were not interfering with anybody, we were not obstructing traffic in anyway. We came into the Independence Square which we got official permission to use and at the end all around us were police officers heavily clad.”
As it relates to the yearly march and rally, Ras Iroy said it is staged against all forms of discrimination, noting “and as usual, we pay special attention to the herb, the unjust laws surrounding the herb, the things that I and I have to do to bring light to the situation.”
He observed that more people took part in the march this year.
“The numbers, to me, looked healthier than some of the previous and I’ve seen a lot of faces that I’ve seen before and that is real important because people who are part of the trod will continue to be a part and will continue to support so I always like when I see the same faces but it is also good to know I see a new face because it tells you that the word is getting out there.”
Ras Iroy went on to say: “But we made a significant change this year in terms of holding the march on a Saturday, we basically shifted to the Friday as we realise it on both islands, there seem to be a lot more people around the town during this time so we figured we’ll have a captive audience to increase numbers on Friday as opposed to Saturday and think definitely we grabbed the attention of the people.”

UPDATE: Information gathered by this media house indicates that the arrested Rasta man was released later that night without being charged. There has been no further information forthcoming on the matter.