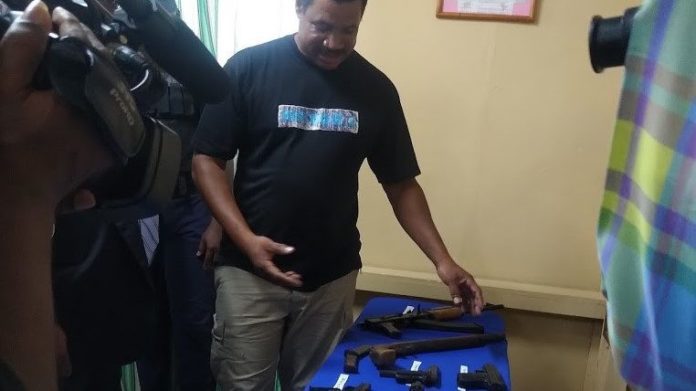 BASSETERRE, St.Kitts (Friday 16th August 2019) – Police have indicated that the thirty (30) guns handed in by gang members choosing to do so will be destroyed after undergoing a process and will be acted upon accordingly if there are results.

Chiming in on the point made by ACP Browne, he stated: “In all of these initiatives with the police, they are in consultation and seeking appropriate legal advice and they act of the basis of provisional advice available to them and the advice comes from persons who are trained and capable to give that advice to them as to how they proceed.”

“These members have decided that they would further demonstrate their level of seriousness to the peace effort by relieving themselves of their weapons. Working through a third party, they have been doing so. To date the police have received 30 firearms and 73 rounds of sorted ammunition. Such an exercise has never taken place in the history of the police force or our country. These weapons will undergo a process and will subsequently be destroyed. When combined with the 13 firearms that the police have been able to take into custody through various operations, we now have a total of 43 firearms that have been recovered from the streets of our communities.”

According to him, “an examination of the period January 1st to August 12th over the past three years show a steady decline in non-fatal shooting and robberies. Where homicide is concerned, there was one incident in 2018 that was over 2017. However, the decline has been more noticeable over the past nine months in all three categories.”

“Any firearm whether handed in or recovered by police goes through a police process and anything derived from that process, the DPP [Director of Public Prosecution] would provide his advice and we’ll follow whatever advice he provides,” responded Assistant Police Commissioner McCarter Browne at the police press conference on Tuesday this week (13th August) at the Police Training Complex in Newtown surrounding an update on the government’ s Peace Initiative launched earlier this year, credited for those gun hand-ins and overall connected to a decrease in homicides in the Federation since February.

He was at the time responding to questions by local journalists concerning what is expected to happen accordingly when the weapons undergo processing if certain criminal information is revealed.

In adding his voice to the matter, Prime Minister and Minister of National Security Dr. Timothy Harris claimed “We are for justice we are for law and order and nothing we have done or we will do will compromise justice so let us be clear on that.”

The top cop said that to date, there has been a 25% reduction in homicide with the last gang- related one having occurred in February.

February this year has been described by many people to be an alarming bloody month in the nation’s history with seven recorded homicides for the shootings deaths of 33-year-old Musa ‘Ziggy’ Warner and 22-year-old ShakeemStevens killed 8th February, 28-year-old Eric ‘Jun Jun’ Thompson murdered on 11th February, Vere ‘Stiff Money’ Amory (said to be in his 30s) killed on 13th February,Joel ‘Bouyaka’ Phillip (in his 20s) and Gavin Rogers (said to be in his late 20s to early  30s) both killed on 14th February  and is 30-year-old Shavaughn ‘Chronic’ Hendricks gunned down on 25th February.