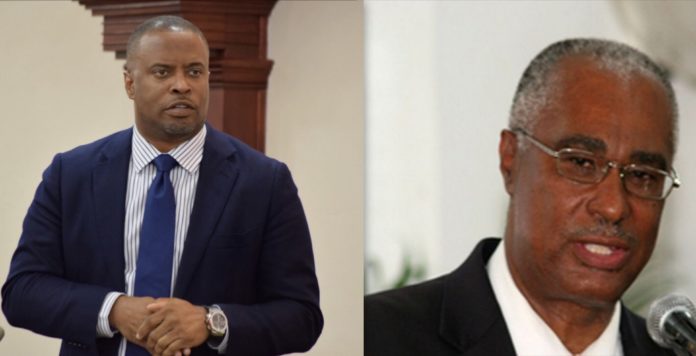 BASSETERRE, St.Kitts (FRIDAY 12TH JANUARY 2018) –Calls made to local government workers to practice showing respect to those in authority publicly, use social media responsibly and also to ensure accountable use of government vehicles as communicated by the newly-elected Premier of Nevis Mark Brantley at a recent meeting with senior civil servants, continue to be debated by members of the public.

Leader of the opposition Nevis Reformation Party (NRP) and past Premier Joseph Parry, during an exclusive interview with this media house yesterday (Thursday), questioned why the first time Premier is suddenly talking about civil servants behaviour.

“Brantley has been in a government in Nevis for the past five years and I never heard any comments from him about the behavior of civil servants… so I’m wondering why all of a sudden he has this need to criticise or tell the civil servants how to behave.”

Speaking before the gathering of senior civil servants on Tuesday 4th January at the St. Paul’s Anglican Church Hall in Nevis, remarked: “Everywhere else I go, when the head of government or government ministers enter the room, civil servants stand to show their respect and their regard. It is not a question for me of wanting honor, it is more of an issue for me of us respecting each other and respecting the positions that we hold.”

In light of such comments by Brantley, Parry told this media house: “Maybe he has a very serious change of heart or maybe he just has dictatorial tendencies. You know he has travelled abroad to all these strange countries and …and perhaps he’s impressed with the flattery that they give their leadership and maybe he wants some of that flattery himself.”

Via social media (Facebook) this week, Brantley sought to put emphasis on three points coming out of that meeting “Thus far in trying to set the right tone for my administration over the next 5 years and ensure that the Nevisian public gets value for money…”

These areas as outlined by him are as follows:

Brantley then went on to point out that “I appreciate that change is sometimes difficult but we shall insist on professionalism in all of our engagements with the general public. This CCM led Administration has a mandate to govern responsibly and we crave the partnership of our public servants to ensure that the Nevisian public gets the best possible service from us.”

As understood by this media, civil servants will be given social media use guidelines.