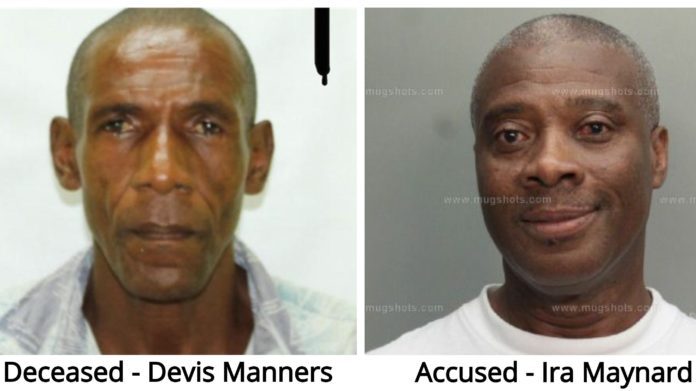 BASSETERRE, St.Kitts (Friday 12th July 2019)-Three days after an identical twin brother Devis Manners, 58, was fatally stabbed, a male said to be his relative was arrested and charged on Friday 5th July.

Accused of the offence of murder is 66-year-old Ira Maynard of Pitcairn Street, Newtown who this media house understands is a cousin of the homicide victim who previously served jail time in the US.

Information gleaned from mugshots.com reveals that Maynard had police booking date in Miami-Dade County, Florida in December 2011 for aggravated assault.

In St.Kitts, he has been charged in relation to the deadly wounding which occurred on Tuesday 2nd July.

On the night in question, police received a report of the incident at approximately 8:00 PM at the Manners family home located in Newtown.

Local reporters learnt from police shortly following the stabbing that Manners was “fatally stabbed by a family member at his home during an altercation.”

An autopsy performed by Resident Pathologist, Dr. Adrian Nunez-Quintana Last Friday (5th July), concluded that Manners’ death was as a result of Hemorrhagic Shock due to a stab wound to the chest.

Following a funeral service held yesterday afternoon (Thursday) at the Wesley Methodist Church in Basseterre, Manners’ body was laid to rest at the Springfield Cemetery.