BASSETERRE, St. Kitts (Friday 8th January 2021) –
Autopsy results released recently for a man who was found dead inside a cemetery in Dieppe Bay has determined that his cause of death was due to severe head injury secondary blunt force trauma, authorities said.
Officers responding to a report of a report of a body being found in the Dieppe Bay Cemetery at about 11 p.m. on Saturday 26th December 2020, discovered the  motionless body of  54-year-old Bevington Francis of Dieppe Bay lying on the ground with what appeared to be multiple wounds to the head.

Preliminary investigations so far have revealed that Francis, who lived nearby, was on his way home when he was attacked by an unknown assailant.

The District Medical Officer visited the scene and pronounced him dead.
An autopsy was performed on December 30, 2020 by Resident Pathologist, Dr. Adrian Nunez concluded that death was as a result of acute subdural hematoma due to severe head injury secondary blunt force trauma.

The Police are making an appeal to anyone with information regarding this incident to contact the Violent Crime Unit by dialing 467-1887, 467-1888, 662-3468, the Dieppe Bay Police Station at 465-7261, their nearest Police Station or the crime hotline at 707 where information can be given anonymously. 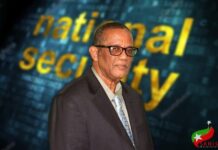