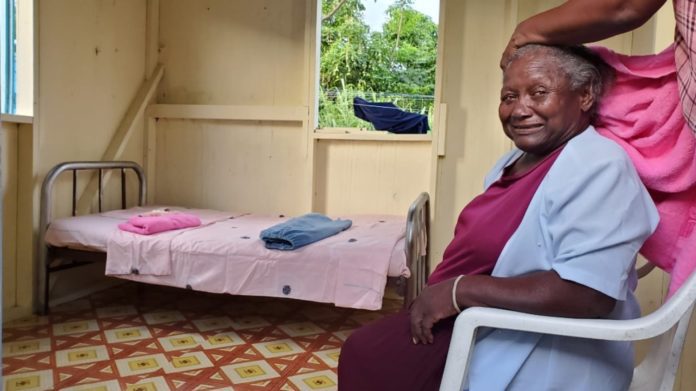 BASSETERRE, St. Kitts (Friday 9th August 2019) – Like an episode from a popular home makeover TV show, residents of a housing compound in the community of Sandy Point were recently able to occupy their renovated homes compliments of the management and staff of Diamonds International St.Kitts who spearheaded the project in partnership with other contributors.

This media house recently had a sit-down interview with the company’s General Manager Na’ama Omry Amir about the six-day outreach project which kicked off in late June (25th), aimed at improving the lives of families as the company continues to give back to the communities around the island.

“We rolled our sleeves up and we said instead of one house, we have ourselves three houses. We cried at the end because we were so happy and pleased to see them. It was really hard to see before and we were satisfied after. We have told them please, ‘We did what we could do and now it’s you to keep it’.”

She labelled the home fix-ups  “our biggest project of all.”

According to her: “We thought it was going to be two or three days but during the work sessions, we found so many things to improve that we didn’t stop and so we did more and more. We were so happy and the people were so pleased.”

As gathered, initially it was intended that assistance would have been provided by to a family in need but after the small housing area was discovered, plans were changed to facilitate such at that home area provided by government over 11 years ago.

Fixed beds, building new shelves and constructing a small kitchen equipped with appliances were included on the to- do list also.

“If you go to Sandy Point, your first turn up the road after passing National Bank, you’ll see the Blue Hood project by Diamonds International, you’ll see the blue painting… and they (the residents) loved the name (Blue Hood) so we’ll keep it,” she added with a broad smile.

As understood, the Diamonds International crew wanted to move the residents somewhere else so that the work could have been done faster but there was some objection by because of a routine clinic trip by one of the occupants who had to get her insulin shots.

Notably, the Diamonds International crew assisted with those medical visits.

Apart from being in work mode, the workers sang while carrying out the daily tasks and also mingled with the residents there.

“We sat in the shade… We shared food with them, “Amir disclosed about moments while taking breaks.

On the subject of tossing out old clothes during the fix-up period, she pointed out: “We taught them why it is important to get things out in order to get in, you know? So, we let them keep the ones that they love.”

All of the clothes that needed washing were handled free of cost at Elite Laundry located in the St. Johnston community.

Amir, while reflecting on the emotions of the home owners, expressed gratitude to her staff and colleagues.

“To go to the toilet and bathe, it was a big deal for them! To see them sleeping on their new sheets and everything that was everything for us. We were so pleased and happy! It really was the biggest project. We didn’t predict it to be so long and over budget but we did it with all our hearts and souls. It was something like I always knew the team is incredible but I had no words for them at the end of it how everybody did so well collectivley. They were sitting for 10 mins and you think that they are done and they were continuing…sitting and cleaning non-stop. It was six days of non-stop work.”

“Look at my WhatsApp; see our group chat. See what I call them? ‘The Incredibles’ because they are! It’s amazing! When were are doing social work, they are like ‘Yeah!,’” she said while showing this reporter her phone.

Amir applauded the Owner, Chief Executive Officer and President of Diamonds International Albert Gad for his passion of giving back to communities.

“He always say like after hurricanes, we rebuild houses on all the islands we live in. We are rebuilding houses and schools and we are helping the environment like we helped to clean the beaches so it’s coming from our CEO who encourage us to do it and he says even though he has so many stores, we are so fortunate to be number one but we never forget where we come from; it is very important that people remember and that we give back wherever we are. What I like about this company is the people; we are not just donating and saying ‘ok take this money’…we are in the field and we are making it happen by our own hands and that’s the satisfaction and that’s giving back and that’s the value that we are engaged in.”

One of the Blue Hood Project resident Andy E. Anderson Hendrickson said he has been living at that area since 2009, and the family, made up of his wife and mother-in-law, had been looking assistance since last year.

“I’m very glad for what Diamonds International company has done. I’m very grateful for it. I appreciate what they have done for us …I realise that God has sent someone in our way to help us and we are very glad and grateful for it and I hop and trust that they would  get to go elsewhere to help others because others would need it also.”

Ulrica Fleming Payne- Williams, caretaker of her mom 91- year- old Mary Payne commented: “I must say that I appreciate what Diamonds International has done for us. It was a big task for them putting things together so nicely…it feels like a little hotel; everybody who comes they just love it and I dressed it up with these beautiful curtains and make it nicer so we say thanks to Diamonds international for your great contribution to our home to the Fleming/Payne family.”

She also said that her mom “feels good” about the home make-over while adding “It’s a big change to what it was.” Other partners and contributors of the Blue Hood project include Dwyer Astaphan, Bicknell Thompson of Universal Building Maintenance, TDC, Horsford and Company Ltd., NAGICO, Elite Laundry and Hobson Enterprise.