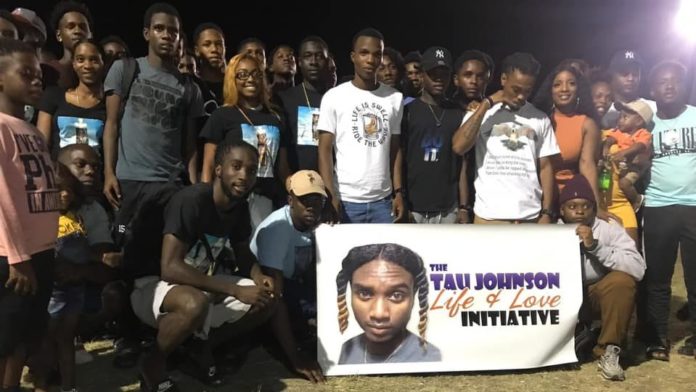 BASSETERRE, St.Kitts (Friday 12th July 2019) – Could have the controversial death of 20-year-old Tau ‘TJ’ Johnson been prevented if proper healthcare emergency techniques were carried out at the scene of that July 2018 traffic accident along Wellington Road in Basseterre?

This media house spoke with a group member of the Tau Johnson Life & Love Initiative following this week’s launch event and spotlighted the above question during the interview.

“Yes, and that has been one of the most important turning points for us because the social media videos were out there so persons saw how horribly he was handled and then if persons who were on scene knew what should have been happening then all the extra doubt wondering if and why could have been eliminated so we’re trying as much as possible as a group to take away the wondering from another family,” she replied.

On Sunday 7th July at the Patsy Allers Playfield in the St. Johnston’s community, the Initiative was introduced in tribute to the deceased on the observance of his 21st birthday.

The event dubbed ‘Tau Forever’ in celebration   ‘21 Years of Love & Memories’ was organised by family and friends with scores of individuals in attendance including past schoolmates of the Washington Archibald High School.

As it relates to the group’s goal, she explained: “The initiative has been created to turn pain to purpose and the aim is to get the residents of St.Kitts- Nevis and the whole Federation educated and trained in first aid and urgent care procedures and manoeuvres. So in the event something happens, we all can know what to do safely and when to act …so that we can know from trained professionals the right way so that if something happens we can all act rather than standing around.”

It is understood that the group is being powered by young persons with 21 core members at present comprising of siblings, classmates, teammates and friends.

It was further explained that the group welcomes anyone to provide input, support and assistance.

A cousin of the deceased in speaking to this media expressed: “Well, I personally feel it would be really beneficial once we get the whole nation onboard to grasp the idea, especially since not enough people know how to cope and handle injured persons. It was a great idea to suggest having first aid procedures integrated into school curriculums and other social structures. I actually never learnt first aid until my occupational health and safety class at CFBC. #TAUFOREVER!”

A community resident Akiyah Dan told: “The launch event was good. I like the fact that friends and family members gathered. I hope they continue in the upcoming years to get justice for him. May his soul continue to rest in peace.”

Last year, Johnson who was known as ‘TJ’, on his 20th birthday, was involved in what police said was “a fatal accident” along Wellington Road in Basseterre after he tumbled from a motorcycle in what police described as a police chase.

An autopsy performed by forensic pathologist Dr. Valery Alexandrov determined that he died as a result of acute internal blood loss due to a ruptured aorta sustained in the vehicular accident.

The young man’s death sparked a controversial debate surrounding the police chase itself as well as how he was handled by Emergency Medical Services workers.

‘Justice For TJ’ was the banner of a silent protest march throughout the streets of Basseterre in July 2018.

Another protest was also carried out on the premises of the Joseph N. France General Hospital.

In June, a police press statement informed that “in an official report received from the Director of Public Prosecution (DPP) in late January 2019, it was stated that based on the evidence provided from the independent investigation and the CCTV footage, the vehicle driven by the police officer was not driven in a manner which posed a danger to the deceased or members of the public. The police were in pursuit of the deceased who failed to comply with a siren request to stop.”

According to the authorities, the report also confirmed that “an independent vehicle examiner found no evidence that the vehicle made contact with the motorbike driven by the deceased.”

It concluded that “on the evidence available, there is nothing to suggest any careless, reckless, or dangerous driving on the part of the police officer. It is not recommended that any criminal sanctions be brought against the officer involved.”

Members of the public have been bashing the report from the authorities.

Persons interested in reaching out to the Tau Johnson Life & Love Initiative group can do some via 1-869-660-6677.