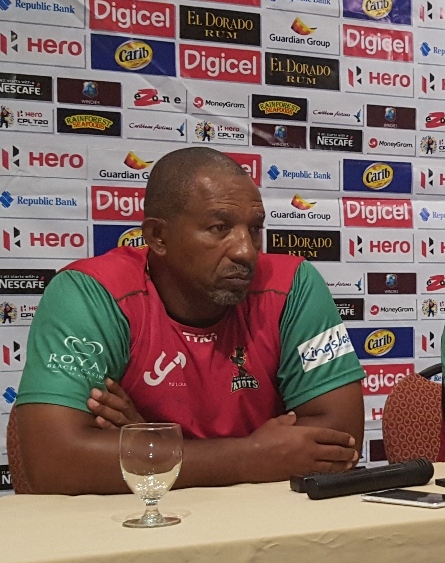 PHOTO: Head Coach of the St.Kitts and Nevis Patriots Phil Simmons while at a press conference during the period of matches played in the Federation (Spokesman Snap)

So said Head Coach of the St.Kitts and Nevis Patriots Phil Simmons while speaking to local reporters on the night of Wednesday 23rd August at the Warner Park Cricket Stadium following the match lost to the Trinbago Knight Riders in the climax of four matches of the Hero CPL tournament played here.

His remarks came in response to a question posed to him concerning what the team has to work on going forward for the upcoming games.

The home team departed the Federation on Thursday 24th August en route to Jamaica for another leg of the CPL tournament having won two out of four matches.

Following Wednesday night’s game, the Knight Riders won after multiple delays (due to rainfall and power blackout) and needing on 86 to win off 6 over following the final delay.

They reached 86 for 2 off six overs resulting in the Knight Riders securing a spot in the finals to be played in that team’s home country.

“This is the first time that we’ve been taken apart. This team is the only team that has taken us apart…We are working hard on everything that we need to do and there are some days that you don’t get it right and today was one of those days,” he also stated during the chit-chat with reporters.

Speaking about the performance of team on home soil, Simmonds said: “ It’s just that the guys wanted to do well, as simple as that so they come out and they worked hard and they tried to do other things; batting has been excellent, the bowling has been good. We’ve had two bad bowling spells and both against Trinidad but other than that everything’s been going good. We played well, we had four games here, we won two and we should have won the next one (but) rain came but all and all, I think we’ve done well at home, we just need to look forward to the other two games and then to the playoffs.”

The outcome of the other three matches played are as follows: Friday 18th August- the Patriots defeated Barbados Trident by 13 runs via the Duckworth/Lewis system; on Saturday 19th August Patriots vs St. Lucia Stars, that match was abandoned due to rain and on Monday 21st August in the match Patriots vs Jamaica Tallawahs, the Patriots won by 37 runs.

Come Wednesday 30th August in Jamaica the Patriots will play against the home team the Jamaica Tallawahs followed by a match the Barbados Tridents in that tam’s country scheduled for Sunday 3rd September.