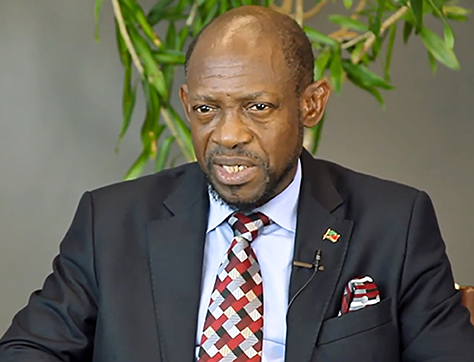 BASETERRE, St.Kitts– While Opposition Leader Dr. Denzil L. Douglas was off island on Tuesday 14th November, due to travel arrangements booked before the scheduled sitting of the House of Assembly, allegations about him holding a Dominican passport was brought up in party-politics style by members of the Harris-led administration who also made teasing remarks punching at him.

A presentation by the Attorney General Vincent ‘Juicy’ Byron Jr. did not sit well with Opposition Member, Parliamentary Representative for Constituency Two (Central Basseterre) Hon. Marcella Liburd who is a former House Speaker.

As a result, she objected to those remarks being allowed citing an abuse of the House as Byron gave his statements.

“We have evidence that the member for Number Six has a diplomatic passport that states in it that he is a Dominican national. This government, Mr. Speaker, will like to place on record our very deep concern that someone who has led this country for many years and who still sits in this Parliament should hold a passport of another country…” Byron said in part.

He also told that proceedings have begun to take the matter to the high court “to determine whether the member for Number Six should vacate his seat or not.”

That particular statement was met with table knocking applause on the government bench side and PM Harris expressed: “Yes…Yes…Yes…Yes.”

Liburd’s disapproving comments caught the ears of Speaker Michael Perkins who dismissed her view claiming that the matter raised is a live public issue.

“Honourable member for Number Two, Hon. Marcella Liburd, I’ve clearly heard you speak to some abuse of the House. You are in effect questioning my authority to assess what is said in here whether it amounts to abuse or not. Well, if you say this is an abuse of the House, it in effect means that the Speaker is allowing abuse of the House which I cannot accept. This is a live issue in the public domain which speaks to the very functioning and composition of our parliament. What I would say is that I’ve indicated( and) I’m also under advice; the AG [Attorney General) has said the same- if in the event the matter is placed before the court and I’m so advised then I would know how to handle the matter if it comes up in parliament but until that time, I will use my discretion to allow comments, members speaking to it and I would use my discretion to know how far I would allow them to go but it is a serious matter,” the Speaker told her.

Notably, Dr. Douglas is on record publicly denying accusations put forward by the Harris-led administration in questioning his loyalty to St.Kitts-Nevis. He has indicated that the only country which he has an oath of allegiance to and which he has dedicated his life to is the Federation of St Kitts and Nevis.”

Before Byron’s presentation, the Speaker read a letter dated 23rd October, 2017 from the Leader of Government Business Eugene Hamilton- the Parliamentary Representative for Constituency Eight- which addressed the passport allegations.

“In my respectful view, the holding of a diplomatic passport by the member for St. Christopher 6 raises implications for his qualification and eligibility to serve as a Member of the National Assembly of St. Christopher and Nevis,” that letter read in part.

On the heels of the accusations levelled against him, the Opposition Leader put out a written statement expressing disappointment that “Parliament is being used as a political theatre.”

Dr. Douglas stated: “Citizens and Residents of St. Kitts and Nevis, supporters of the great St. Kitts-Nevis Labour Party, friends and well-wishers, I greet you in my capacity of the Leader of the Parliamentary Opposition of St. Kitts and Nevis. It has been drawn to my attention that earlier today, Tuesday November 14, at the commencement of the sitting of the National Assembly, Speaker of the National Assembly Hon. Michael Perkins read into the records of the Parliament a letter purportedly written by Mr. Eugene Hamilton, Member of Parliament for Constituency #8, raising questions about my qualification as a member.”

He added: “It is quite unfortunate that the hallowed chamber of Parliament is being used as a political theatre, facilitated by the Speaker, in a useless attempt to rekindle the dying political fortunes of Dr. Timothy Harris and some of his cohorts. I reiterate the point that the Parliament is being used as a political theatre because Dr. Timothy Harris, Mr. Eugene Hamilton, Speaker Michael Perkins and all members of Parliament are well aware that under our Constitution, the Parliament of our land in and of itself cannot address matters to do with the qualification of members to sit in the Assembly.”

“This is a matter which only the Courts of our land can determine. For Speaker Michael Perkins to read Mr. Eugene Hamilton’s ill-conceived letter into the records of Parliament is irresponsible and reinforces the public’s views of the Speaker a bias arbitre of the Parliament’s business. Mr. Hamilton’s letter is nothing more than a political gimmick that he is performing under instructions from his failing leader Dr. Timothy Harris.”

“Secondly, Prime Minister Harris, as a consequence of his ever dwindling political support among the electorate of St. Kitts and Nevis, has sought to engage in political distraction. Recent polls (September 2017) conducted in St. Kitts reveal ever-growing disenchantment with Prime Minister Harris. Sixty-five per cent (65%) of the residents and citizens are dissatisfied with the leadership of our country and only 29% are satisfied with the failed leadership of Dr. Harris. On the other hand, 63% of the populace favour my leadership. These are the facts and figures that have incensed Dr. Harris – his failed leadership and his desire to resurrect his ill-fated political career.”

Hamilton’s claim, during his opening remarks in the personal explanations segment, about being be a little disappointed at Dr. Douglas’ absence saw PM Harris cut in saying “He [Douglas] was summoned to Dominica” which was met with laughter from his colleagues.”

Information coming from the public relations office of the St.Kitts-Nevis Labour Party  disclosed that “The Labour Party and the Opposition are firmly of the view that this particular parliamentary session was scheduled in an effort to make the rumour about Dr. Douglas being disqualified as a member of parliament appear factual.”