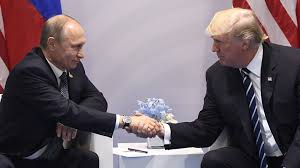 Donald Trump and Vladimir Putin have held their first face-to-face talks, on the sidelines of the G20 summit in the German city of Hamburg.

“It’s an honour to be with you,” Mr Trump told Mr Putin, who responded: “I’m delighted to meet you personally.”

Both sides listed a wide range of topics discussed, including Russia’s alleged meddling in the US election.

Climate change and trade are set to dominate the two-day G20 meeting.

Violent clashes between protesters and police have taken place in the streets outside the venue, with dozens left injured.

A huge police operation is trying to keep demonstrators – who are protesting against the presence of Mr Trump and Mr Putin, climate change and global wealth inequalities – well away from the summit venue, and water cannon have been deployed.

Earlier, US First Lady Melania Trump was unable to leave her hotel in Hamburg because of the protests.

“Putin and I have been discussing various things, and I think it’s going very well,” Mr Trump told reporters while sitting alongside Mr Putin at the start of the talks, which were open to the media.

“We’ve had some very, very good talks. We’re going to have a talk now and obviously that will continue. We look forward to a lot of very positive things happening for Russia, for the United States and for everybody concerned.”

Mr Putin, via a translator, said that while they had spoken by phone, a phone conversation was never as good as meeting face to face.

Both men ignored shouted questions from reporters as the meeting went into private session.

Speaking afterwards, Mr Putin said: “I’ve had a very long conversation with the US president. We had a lot of issues to discuss, including Ukraine, Syria, and other problems, also some bilateral issues.

“We have again returned to the fight against terror and to cyber security.”

Secretary of State Rex Tillerson largely confirmed these were the topics covered, saying the leaders connected quickly and had positive chemistry.

But the two sides seem unable to agree on the exact outcome of talks over the Russian hacking allegations.

Mr Tillerson, meanwhile, said the two men had had a “robust” discussion on the issue during the two hour and 15 minute meeting, and that Mr Trump had pressed the Russian leader on several occasions.

However, he said it was not clear whether the two countries would ever come to an agreement on what happened.

“I think the president is rightly focused on how do we move forward from something that may be an intractable disagreement at this point,” Mr Tillerson said, according to the Associated Press news agency.

Mr Tillerson also said they had discussed Syria and its future, and shared “commonalities on what outcome should be”, although they had different ideas on how to get there.

They have, however, agreed to declare a ceasefire in south-west Syria from Sunday, Mr Lavrov said.

Earlier, a brief video clip posted on the German government’s Facebook pageshowed Mr Trump and Mr Putin meeting for the first time and shaking hands, with Mr Trump patting Mr Putin’s arm as they smiled in the company of other leaders.