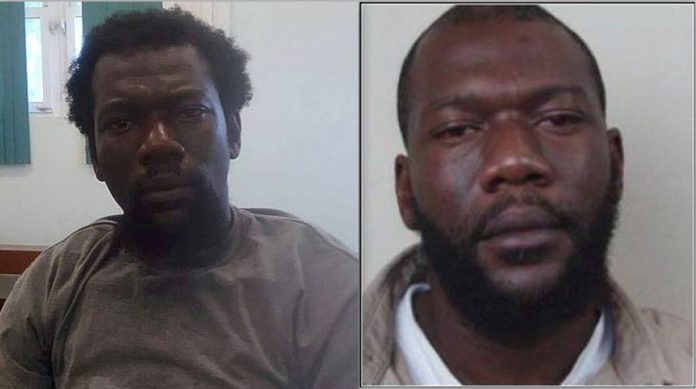 BASSETERRE, St.Kitts– While on the run from police for over a year, the convicted killer recently caught and deported back to the nearby island of St. Maarten, grew his hair and changed his beard as observed in compared police mugshot photos.

The fugitive, 39-yar-old Kathron ‘Cuchi’ Fortune, last Friday (4th July), was sent back home to resume his 21-year murder prison sentence following an appearance before the District B Magistrate that day to answer local charges laid against including gun and drug possession which he has gotten away from.

As understood, Fortune, who is originally from the island of Grenada, escaped on Monday 15th February 2016 while being escorted by prison guards in waiting to be attended to during scheduled doctor’s visit. He has been taken back to that jail to serve the remainder of his sentence for the murder of Ervin Margarita in May 2006.

Police on St.Kitts informed that the charges were discontinued after the Director of Public Prosecution (DPP) looked at the matter with the best interest in mind.

“The DPP having assessed the matter with a view to determine the best course to adopt, determined that our best interest would be served by discontinuing the charges,” said the local authorities in a press release.

Further details outlined: “Consequently, he exercised the powers so vested in him under section 65 (2) (c) of the Constitution to discontinue the charges. This paved the way for Mr. Fortune’s immediate expulsion from the Federation. A deportation order was then sorted and he was deported to St. Maarten later that day escorted by Law Enforcement officials of St. Maarten.”

On Saturday 29 July, members of the Royal St. Christopher and Nevis Police Force acted on information and arrested Fortune in response to the sighting of unusual activity along the coastline in Cranstoun Bay, an area in the vicinity of Newton Ground.

Initial police investigations determined that he had illegally entered the Federation of St.Kitts-Nevis.

Reportedly, Fortune at the time of his arrest had in his possession, amongst other things, a high powered Firearm with a large quantity of matching ammunitions, a bulletproof vest, a large quantity of cured marijuana, some hashish and a sum of US currency.

Having contacted and advised police in St. Maarten were of the arrest, local authorities then discovered the man’s criminal background.

On the day Fortune escaped from police custody in St. Maarten, which happened at about 3:30 PM that day, he was on a visit to orthopaedic surgeon Dr. Paul de Windt in Cay Hill.

As gathered, he took off running and shots were fired at him by the prison guards. Eyewitnesses claimed Fortune shot at the guards as well.

While on the run from police, he was labelled as being “armed and dangerous.” Members of the public were also advised that he had possibly changed his appearance and might have been using several disguises and mode of transportation to get from one location to another.

PHOTO: In this photo collage showing a year part police mugshots, the changed appearance of convicted killer Kathron ‘Cuchi’ Fortune, who had been on the run for over a year, can be seen (Left) 2017 and (Right) 2016