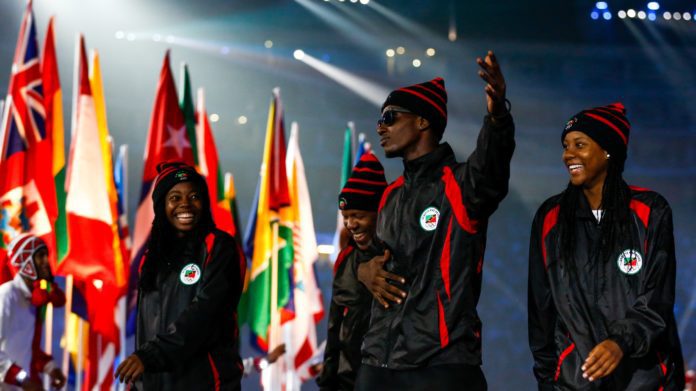 The St. Kitts and Nevis delegation to the 2019 Pan Am Games are in Lima, Peru and ready to compete. The Games officially opened on Friday night at the National Stadium in Lima, following the flag raising ceremonies last week Wednesday and Thursday. The Flag of St. Kitts and Nevis was raised last Thursday. There are four athletes representing St. Kitts and Nevis primarily in athletics in the coming days. Reanda Richards is a 400m hurdler, Shenel Crooke will compete in the women’s 100m, Jason Rogers in the men’s 100m and Jermaine Francis in the high jump.

After Thursday’s flag raising ceremony, Rogers, participating in his third Pan Am Games, was very confident that he will perform well at the games. “It’s always an amazing and exciting feeling to represent my Federation at this kind of level. So I just want to go out there and give it my best shot,” Rogers said. “We have been here a few days and everything is going well; everything is going as planned so I am just hoping for a good competition and a good meet,” he added. Rogers has been coming off an injury and has not yet competed since the start of the year. Despite this, he is hoping to get a good opportunity in these games. “Training has been going very well and I am feeling very strong so I am going to use my confidence and experience to get me through whatever I need to get through,” he said.

For Shenel Crooke, this is her second time at the Pan Am Games. “So far, it has been a good experience. (Last week Thursday) is my second day of training and I am getting acclimatized to the cold weather and so far I have been enjoying myself in the village. The people have been nice and I am looking forward to very good Games this year,” Crooke said.

400m hurdler Reanda Richards is competing in the Pan Am Games for the very first time. “My preparations have been going pretty well. I have been training…getting myself acclimatized because (of the high altitude of Lima). I am looking forward to see what else I can do with my race when it all happens,” she said.

The only high jumper from St. Kitts and Nevis in these games Jermaine Francis is looking forward to the games. “I am feeling very confident at my very first Pan American Games. I am going into this event with a very strong committed mind and I am trying to make my country very proud,” he said.

Dennis Knight, is acting as president of the St. Kitts and Nevis Olympic Committee (SKNOC) in these Games as the actual president Alphonso Bridgewater is functioning in his executive role on the Panam Sports, the organizers of the Pan Am Games. Mr. Knight said the temperature is cold, but the athletes are in good spirits and are settled in the Athlete’s Village. “I think we got a good team. A small one on this occasion—only athletics. Last time we were able to have table tennis,” he said. “It’s cold and therefore challenging for the athletes. We have a couple of first timers and that is going to be interesting too but Coach Lonzo Wilkinson has expressed a lot of confidence in the newbies,” Knight said. “We look forward to really good performances and as usual for our team to represent us well.”