BASSETERRE, St.Kitts– More than fifteen (15) minutes of the opening statement made by Prime Minister Dr. Timothy Harris at his press conference held at Government Headquarters on Tuesday 3rd October was spent surrounding the topic that Opposition Leader and immediate Prime Minister Dr. Denzil Douglas of the St.Kitts-Nevis Labour Party holds citizenship of another country besides St.Kitts-Nevis, mistruths that could see legal action built on a case of defamation.

“I challenge Dr. Denzil Douglas now to confirm the truth or otherwise of the forgoing information to which I have been made privy to and I have shared in the public interest,” commented Dr. Harris in the live radio and television broadcast session.

His allegations are as follows:

Dr. Douglas has publicly answered Dr. Harris through spoken words addressed to the citizens and residents of the nation.

In a fake news-correction type of response, he took over 6 minutes quashing such allegations while giving his opening statement on the Party-sponsored ‘Issues’ Programme aired live on Freedom FM (106.5) the next day (Wednesday) indicating that Dr. Harris “used our tax payers’ dollars to hold a press conference to spew untruth about the leader of the opposition.”

64-year old Dr. Douglas, who has been a member of parliament for 28 years, echoed his loyalty to the Federation of St.Kitts-Nevis.

“My fellow citizens and residents, let me absolutely clear. I have served you as prime minister for nearly 20 years and served in our Parliament since 1989 continuously. I have never held and will never hold the citizenship of any other country except the one in which I was born and the one to which I have committed my life to serve.”

Dr. Douglas gave PM Harris 48 hours to retract the statement he made by issuing an apology whilst noting that failure to do so will result in lawsuit being filed against him.

“I want to say now that I give him 48 hours to retract his statement and to apologise. If he does not, I will then pass the information to my lawyers for them to institute what I believe should be a defamation lawsuit against Dr. Harris.”

Dr. Douglas encouraged citizens and residents not to be distracted by the false statement made by Dr. Harris.

“I address you today to encourage you to utterly ignore the vociferous distractions that our failing Prime Minister Dr. Timothy Harris is deliberately and deceptively creating to lure you away from focusing on the failing polices of the government of the incompetence that he leads.”

He highlighted the contents of a statement issued by the Opposition Leader’s office the day before (Tuesday 3rd October) challenging the nature of the government’s newly-established Hurricane Relief Fund that will be operational for a period of six months only.

“Within the last twenty-four hours, I brought to your attention that Dr. Timothy Harris continues to lead a government of actors; actors who are only concerned about their personal and financial interests and their families and some friends.”

Dr. Douglas continued: “(That) citizenship by investment policy or programme promulgated by his government is just another part of the deception and corruption in which his government continuously operates. In my recent address yesterday, I posed a number of serious pertinent questions to the Prime Minister about the citizenship programme and instead of responding to those questions that focus on the good people’s business especially at these difficult times, he used our tax payers’ dollars to hold a press conference to spew untruth about the leader of the opposition.” 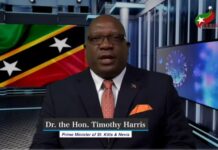 Curfew Among 10 Measures As COVID-19 Cases Increase In SKN

Curfew Among 10 Measures As COVID-19 Cases Increase In SKN