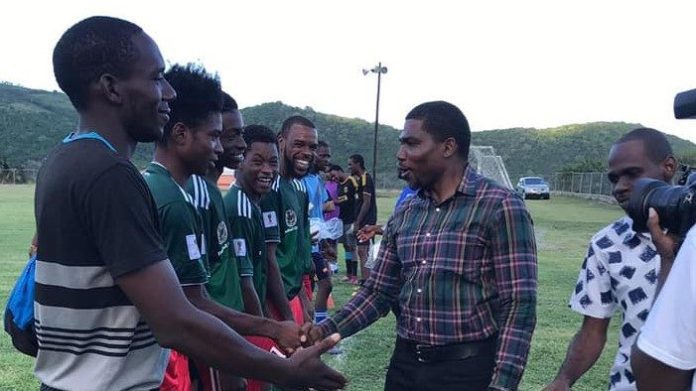 BASSETERRE, St.Kitts (Wednesday 14th August 2019) – Over the past weekend, the annual community football league sponsored by well-known community activist Dr. Terrance Drew kicked off with much enthusiasm and readiness from all eight (8) participating teams, including the defending champions- Douglas United.

On Saturday 10th August, the opening ceremony was held at the St. Peter’s football grounds featuring the different squads of the yearly tournament which has been the longest running community football league in the Federation of St.Kitts-Nevis  in partnership with the St. Peter’s Football Association.

“I really want to give credit and acknowledge all the teams that are participating in this league; you have done splendidly well! To the 2018 champions…I’m already hearing that the other teams are ready to take you down. That is what the competition is about, and so may the best team win!” remarked Dr. Drew as he applauded the teams for making the league a success.

He encouraged the footballers to use sports as a means of developing themselves as athletes, teams and individuals.

“The discipline that you get from sports, you can apply it to different areas of your lives. Some of the best leaders that we have known were good sportsmen and it’s because they translate all the skills and capacities that they would have gained over the years as sportsmen and sportswomen and translated those into their personal and professional lives.”

Dr. Drew, who hails from the community of St. Peter’s, spoke about the importance of giving back to one’s community and admonished others to do likewise.

“It takes all of us to work together to build a community…and so my giving back is really to help the community so that we can live well as Kittitians and Nevisians. This community means a lot to me like any other community throughout St.Kitts-Nevis. I really believe in giving back. From what you have gained from a community, you can never really give back all but giving back what you can is important for the continued development and upliftment and I really believe that most of you believe in that and so I want to challenge you to give back something to you community…give back something to you team; no matter how small it is – it could be helping an old lady across the street or buying a book for a young man who’ll be going to school this year…”

Since the 1990s, Dr. Drew has been investing in the league which includes having coached the first championship youth team in 1998 of which present professional football star Atiba Harris was a team member.

“Watching Atiba play at that stage and he has become one of the most prolific champions from St.Kitts-Nevis tells me that any young man from this community and from St. Kitts-Nevis who participate in leagues like this in building themselves up can reach far.”

Similarly, such sentiments of gratitude were expressed by President of the St. Peter’s Football Association Shannoid Bass as well as organising committee member Kimba MaClean.