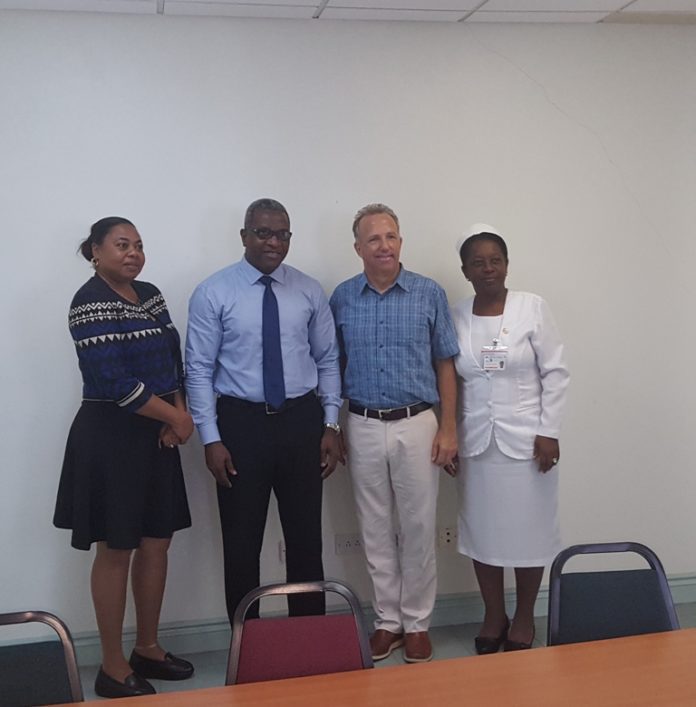 BASSETERRE, St.Kitts- Christophe Harbour Foundation has contributed US$20,000 (EC$54,000) geared towards assisting with the purchasing of a new ambulance for the Joseph N. France General Hospital, increasing the fleet to three at that health care institution.
At the hospital’s compound on Tuesday 29th August members of the media attended a brief ceremony to find out more details regarding the recent financial donation.
Officials in attendance were Chief Of Staff Dr. Cameron Wilkinson along with his colleagues Director of Institutional Nursing Services Shirley Daly-FinleyDirector of Institutional Nursing ServicesDirector of Institutional Nursing ServicesDirector of Institutional Nursing Services and Operations Manager Gail Cranston and also Founder and Chief Executive Officer of the Christophe Harbour Development, Charles ‘Buddy’ Darby.
Dr. Wilkinson explained that the donated money will be added with fundraised cash by the hospital’s surgical team plus governmental input in order to purchase the new ambulance estimated to cost EC$255,000.
“We had our fundraising concert about three weeks ago and in total, we were able to about $150,000. This would be given to the health institution and the government will partner with us in terms of purchasing the ambulance. We have an estimate so far of about EC$255,000 so we are more than halfway there with the other funds coming from government. Later this year, we would have the ambulance on board.”
He said that five years ago, the members of the surgical team decided to start a fundraising concert.
“We realised that we could not expect government to do everything as it relates to the purchasing of equipment etc.; that we need partnerships and so with the Windsor (University School of Medicine) students who were on the surgical team service, we organised a fundraising concert.”
Dr. Wilkinson said that the first concert was held at Ma Pau located on Port Zante and about $12,000 was raised.
“We continued with this effort and over the year, we saw a steady increase in the funds that were raised from this effort. Last year, we raised about $50,000 and this year, we decided that we will try to see if we can double our efforts because our plan was to raise as much funds as possible to go towards the purchase of an ambulance,” he added.
Dr. Wilkinson also talked about the challenges faced in relation to request for ambulances service on the island.
“We know that people call upon the hospital for service all the time and sometimes some persons don’t realise how much we are stretched, especially when we have activities like Carnival, Music Festival, cricket etc., we sometimes have to have an ambulance designated to those events and still expect to do our regular job going around the island picking up persons and this is why we decided to focus on the fundraising efforts towards the ambulance.”
Darby, in his remarks, expressed pleasure on behalf of Christophe Harbour Development and Christophe Harbour Foundation to be partnering with the Ministry of Health along with Dr. Wilkinson on the worthy cause.
“Health and wellness and improving the quality of life is a pillar and hallmark of the Darby Foundation and we couldn’t be happier to be a part of this.”
He also highlighted contribution made in the past led by his wife Tammy Darby.
“Christophe Harbour Foundation, in the past, has played a pivotal role in many healthcare fundraising efforts and donations. In the past, led by Tammy Darby, we’ve donated incubators and neonatal care supplies for the hospital. We’ve also delivery beds, nebulizers, cardiac monitors and medical supplies for the Pogson Medical Centre as well.”
Darby added: “The access to emergency response is obviously super important to the Federation and also quite costly so we couldn’t be happier to be a part of this worthy cause and surely our EC$54,000 will go a long way towards that cause.”
As understood, a Christophe Habour emblem is expected to be placed on the ambulance in light of its lump sum donation which is the biggest donation made in the sponsorship (private partnership) category.
Christophe Harbour, located at the South East Peninsula on St.Kitts, is a well-known luxury residential resort development.