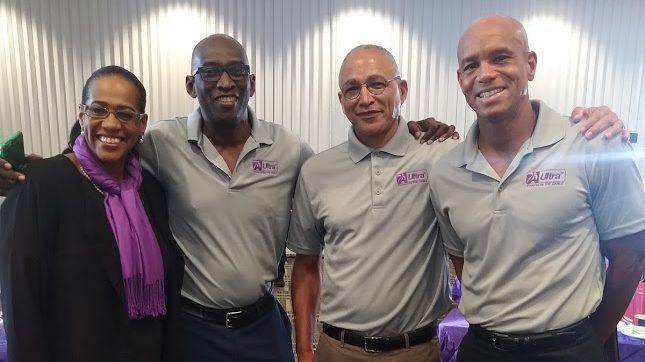 BASSETERRE, St.Kitts (Wednesday 24th July 2019)–In trying to keep up with nowadays competitive options regarding entertainment and TV-watching, The Cable has upgraded its services which include 59 extra channels being added to its 16-channel basic package having recently launched Ultra TV, effective next month in offering better value to customers.

“Ultra TV is a one flat tier tv service that everybody will have…the key message is there is something for you, finally there is something that works. If you have a box, it will work [and] if you don’t have a box, it will work. We’re responding directly to your complaints and paying points, remarked Chief Executive Officer (CEO) Pat Walters speaking at the product launch ceremony held on Thursday 18th July at the Royal St.Kitts Hotel located in Frigate Bay.

She continued: “Way back in December, we did market research and we wanted to hear from hundreds of our tv customers what they wanted from tv. Some of you may have answered some of the questions in the research but that was the foundation for coming up with what we’ve come up with today in this journey to the ultimate tv product.”

Walters also informed that the channel numbers are changing but everybody will receive a letter.

“Every single one of thousands of customers with the new channel guide and that’s just the start; it’s one flat tier. It’s all types of programming-it’s for entertainment, it’s kids,…for the youth from music to entertainment, do-it-yourself and sports of course. It’s an unbeatable package and when you look at the channels it’s not just free to air and music channels, they’re solid channels that people in the market research have said they want.”

Pertaining to 15 channels provided with the basic package, customers who currently pay $37 which amounts $43.29 with VAT “will now get 75 channels; they will get 59 channels more.”

The Cable CEO also shared: “We realised that $37 to $60 is a big jump so these customers [will be] very fortunate; once they’ve paid their bills up when we cut over, they’ll stay at $37 dollars for one year.

Branded with the tagline ‘$60 for 75’, subscribers are expected to pay a total of $70.20 (VAT inclusive) monthly when Ultra TV comes on stream from Thursday 1st August.

“Everybody knows that the way we watch tv it’s completely changed to when we launched almost 36 years ago when we were the leading edge in the region. We are not there now but I can promise you that we will be on this journey of transformation so over the past 35 years and more importantly I would say over the past five to ten years, the whole entertainment and viewing culture of how people watch entertainment and entertain themselves through tv has completely changed,” Walters expressed.

In responding to this media house during the question and answer segment, The Cable CEO highlighted what existing customers can expect during the transition phase.

“On the 29th of this month, we will start cutting over some of the new channels…so in the 29th there may be some channels going in and out but by the end of the 29th, 66 of the 75 channels should be up so by the 1st, everybody should have that first 66.”

As understood, all 75 channels should be in by September.

When about what customers should do with their cable boxes if they choose not to use them, Walters replied: “We don’t anyone to do anything with the boxes just yet because we want them to wait until all of the 75 channels are on and then as we visit for whatever reason whether it’s to put new outlets in rooms or to provide internet, we will take the boxes back.”

As many customers are aware, the government is a shareholder of The Cable.

Minister of Communications Vincent ‘Juicy’ Byron Jr., during his remarks, commended the company for providing a full service at home “without having these boxes, and so we are happy that this Ultra new service does that.”