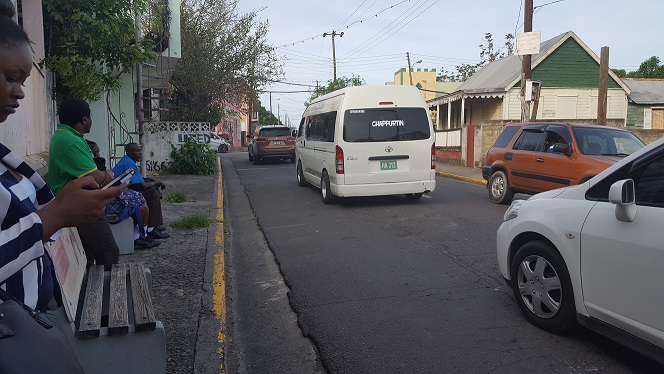 PHOTO: A usual traveler at the eastern bus stop pointed out to this media house when one of the visiting route drivers passed by (Spokesman Snap)

BASSETERRE, St.Kitts- Yesterday afternoon (Thursday), while visiting the eastern bus stop, this media house observed at least two bus drivers challenging traffic police about fairness following a temporary change in travel for western route drivers due to the damaged Old Road Bay in the aftermath of hurricane Maria.
The drivers who complained had their vehicles lined up awaiting passengers. They accused traffic officers of allowing temporary route bus drivers to pick up passengers along the way while in the area.
A traffic warden was heard denying the accusation levelled at her.
Following the closure of the Old Road Bay, the Bus Drivers United issued a statement about an increase in bus fares in some instances because of the longer distance to travel to certain areas around the island.
That topic created widespread public debate.
As understood, a meeting took place on Thursday 21st September between the by Minister of Transport Ian ‘Patches’ Liburd and members of Bus Drivers United.
A press release issued by the St.Kitts-Nevis Information Services (SKNIS) department that day informed that reconstruction work along Old Road Bay was proceeding steadily and that the road would have been reopened to vehicular traffic on Friday 22nd September.
UPDATE: Work continues on the Old Road Bay Road but it is currently passable for motorists.