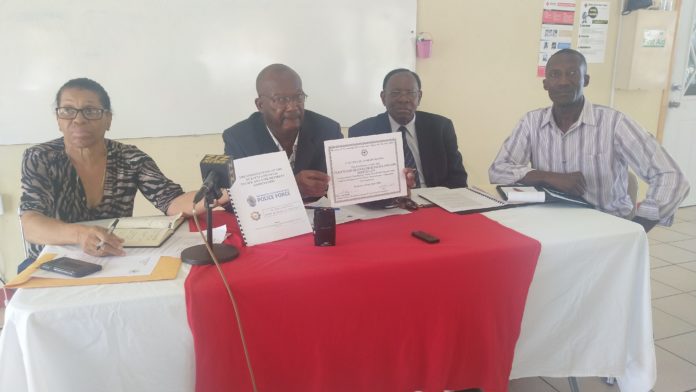 BASSETERRE, St.Kitts (Friday 5th July 2019) – Members of the newly-launched Police and Fire Retire Association of St.Kitts and Nevis are willing to lend their knowledge and expertise to assist the respective organisations they once serve for the overall betterment of the St.Kitts-Nevis despite no longer being on active duty as retirees.

Speaking at the launch ceremony held on at the Red Cross building on Tuesday 25th June, Association President former police commissioner Austin Williams listed the collaboration with the Royal St. Christopher and Nevis Police Force and Fire Services for the preservation of peace and security in the Federation as part of the group’s aims and objectives.

“We started about five years ago putting this association together. We went dormant for a while then I can say we rebounded and now we have officially established the Police and Fire Rescue Retirement Association,” he told.

As gathered, the Police Commissioner then was CG Walwyn.

In highlighting the goals of the association, he shared: “The association, through a structure of international chapters and affiliated supplemental groups undertakes to promote togetherness and good will among its members: Make representation where applicable for beneficial legislation regarding matters affecting the interests and welfare of its members; Promote social, civic, economic benevolent, cultural and educational activities for the benefit of its members and the community; Grant scholarships to deserving members of the community; Interface and partner with relevant  organisations and groups to promote activities locally and abroad  which will benefit St.Kitts and Nevis community; Collaborate with the Royal St. Christopher and Nevis Police Force and Fire Services, as far as may be considered expedient and practicable, for the preservation of peace  and security in the Federation.”

There are three classes of membership namely general, associate and honourary.

Secretary Natalie Fough said membership is open to retirees from any rank “whether it’s constables right up to ex commissioners.”

In reading the invitation letter, it was outlined that “You have spent a great deal of your lifetime in service to the community as a valued member of the Royal St. Christopher and Nevis Police Force and or the St. Kitts and Nevis Fire and Rescue Services.”

Future members are also told that membership is opened to all “who left with a clear and honourable discharge of good fame and character whether you have retired through age, medical discharge, resignation , you are eligible and most welcomed to join.”

Additionally, formers members of other recognised police forces and fire services are also eligible to join.